Pushing the boundaries of human achievement 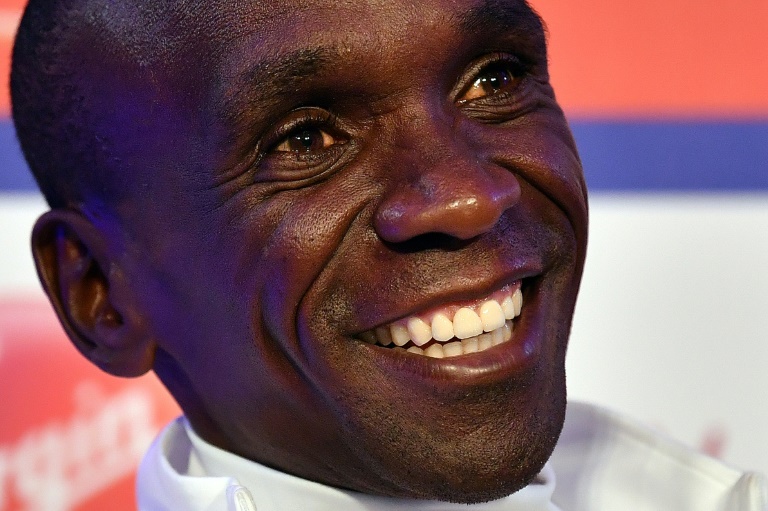 Eliud Kipchoge is bidding to become the first person ever to run a marathon in under two hours. (Photo: AFP)

Eliud Kipchoge's bid on Saturday to become the first person to run a marathon in under two hours will excite scientists and sports followers alike.

The scientists, the biomechanists, the boffins who ponder the workings and capabilities of the human body will be salivating at the prospect of another breakthrough. Just how fast can a human run? Success for Kipchoge will open a new chapter in that particular book.

For the sports fans, the run is, admittedly, of limited value in the sense that it is not an actual race. But they will be well aware that once a door on achievement is nudged ajar then it isn't long before it is barged wide open.

For them Kipchoge is the pacemaker who will drag the rest of the road-running world with him.

"Any human being can go beyond their limits," says the marathon world record holder.

"No human being should be limited in their thoughts, in what he or she should be doing."

In that he is following in a rich tradition of people who pushed the limits and broke new ground in the process.

At some point in the early 1870s - the official date is not recorded - a young Pennsylvania student Walter Halben Butler, who would later make it into the US House of Representatives, became the first person to be credited with running the 100-yard dash in under 10 seconds.

Charlie Paddock could not do it, nor could Jackson Schultz and Harold Abrams. Not even the legendary Jesse Owens.

Instead, Bob Hayes is credited with running the first unofficial sub-10 -- a 9.9 in 1963. He lowered the official world record a year later when he won gold at the Tokyo Olympics in 10.06.

It was Arkansas runner Jim Hines who officially cracked the mythic mark, with a gold medal winning time of 9.95s at altitude in the 1968 Olympics in Mexico.

Today, the record belongs to Usain Bolt who broke the record three times, lowering it from 9.74s to 9.58s, which he ran at the world championships in Berlin in 2009.

Women have yet to crash through the mark. Florence Griffith-Joyner's record of 10.49s was set over 30 years ago in 1988.

The passage of time has gilded the quest to break the four-minute barrier for the mile, a distance not seen often in today's metric athletics world.

It was a big deal back in the 1950s as the Australian John Landy and Briton Roger Bannister competed to be the first.

Bannister, who had come fourth in the 1952 Olympic 1500m, got there first. The medical student ran 3:59.4 seconds to break the world record at Iffley Road in Oxford and shatter the psychological ceiling.

The four-minute mark remains a barrier for the women - world 1500m champion Sifan Hassan took Svetlana Masterkova's record in July with a run of 4:12.33 in Monaco.

The Mediterranean has long been the source of stories of divers plunging into Poseidon's kitchen in the search of treasure, usually in the shape of sponge and pearl or perhaps to pilfer the wreck of an unfortunate ship.

It was in the Med, just off the island of Elba that a free diver descended for the first time to a depth of 100 metres. No breathing apparatus, just a powerful set of human lungs and the desire to push the limits.

Frenchman Jacques Mayol was fascinated with diving and dolphins since growing up in Japan. He developed a mix of relaxation and yoga breathing to enable him to hold his breath for up to five minutes. His pulse would drop from 70 to 20 beats per minute.

He developed a friendship and rivalry with the Italian Enzo Maiorca as they pushed each other to go deeper - the basis for Luc Besson's 1988 film "The Big Blue".

The idea of descent is not centred solely on water. As soon as flight was made possible thanks to the invention of the hot-air balloon, people begin to imagine the fun to be had from climbing out of the balloon and floating down to earth.

Frenchman Andre-Jacques Garnerin is credited with the first parachute jump from approximately 1,000 metres in Parc Monceau in Paris.

It developed into a means of warfare but continued as a sport with driven individuals looking to go higher than anyone else. Could anyone parachute from space?

US Air Force Colonel Joseph Kittinger jumped from 31 kilometres in 1960, freefalling at Mach 0.91, but it was the Austrian skydiver Felix Baumgartner who shattered the world's idea on how high and how fast a person could go.

In 1999, Baumgartner served notice of his daring when he claimed the world record for making a parachute jump from a building, leaping from the 450-metre Petronas Towers in Kuala Lumpur.

In October 2012, with 84-year-old Kittinger as part of his team, Baumgartner went for something even more spectacular - he jumped from the edge of the earth's atmosphere, a height of 39,035 metres, using a pressure suit and a parachute.

He reached a maximum velocity of 373 metres per second and became the first man (outside an aeroplane) to break the sound barrier, his speed reaching Mach 1.24.

Few people are aware that Baumgartner's altitude record fell just two years later when American computer scientist Alan Eustace fell from 41,419 metres. It is only a matter of time before the record goes again.

There has been plenty of traffic between the coasts of England and France since Britain was separated from continental Europe around 8,000 years ago, at the end of the last ice age, but it was only in 1875 that Matthew Webb became the first person recorded to have swum between the two coasts.

The straight line distance is approximately 36 kilometres through one of the busiest shipping lanes in the world.

Swimmers, though, are slaves to the tides and often have to swim much further while coping with the cold and the jellyfish - Webb complained of being stung when he made his crossing.

Although it remains an impressive feat, it is no longer a headline moment - unless you push the limits ever further as American breast cancer survivor Sarah Thomas did last month.

The 37-year-old received the cancer diagnosis four months after an unprecedented August 2017 non-stop solo swim of 104.6 miles in Lake Champlain on the US-Canada border and underwent treatment in the summer of 2018.

That did not stop her tackling the English Channel for a third time. Twice before she had made single crossings, this time she went a bit further, becoming the first person to swim the Channel four times non-stop.

Her swim, which took her a remarkable 54 hours, covered around 209 kilometres.

Her achievement and, indeed, those of all the barrier breakers, was summed up in a tweet from fellow-swimmer Lewis Pugh.

"Just when we think we've reached the limit of human endurance, someone shatters the records," he said.