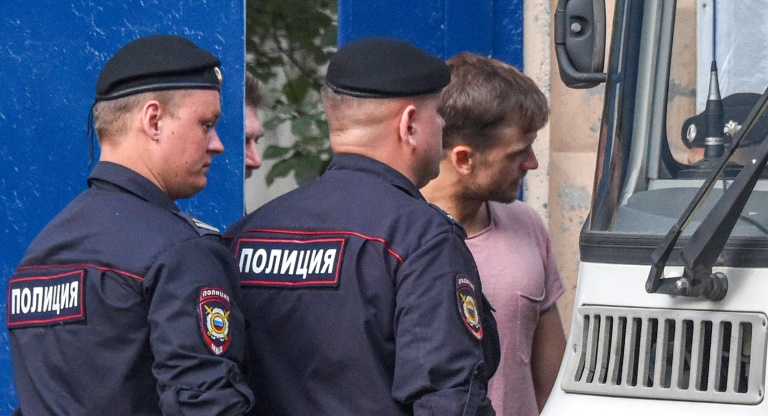 The Pussy Riot punk group member Pyotr Verzilov (R) leaves a detention centre in Moscow, only to be driven to a police station where he tweeted he and three other members were under arrest again for the night. (Photo: AFP)

Russian police on Monday detained four members of the Pussy Riot punk group immediately after they were released from custody, having served 15 days for invading the pitch at the World Cup final in Moscow.

No explanation was given to journalists.

The fourth activist Pyotr Verzilov, released from a different Moscow detention centre, tweeted that he was detained by riot police and driven to a police station next to Luzhniki stadium where the group was originally brought to after their World Cup stunt.

"They (the police) say they will leave us under arrest for the night," he tweeted.

Pakhtusova tweeted a video from inside a police van, saying authorities accused the group of breaking the law on public gatherings.

"Right at the exit of the detention centre they accused us of breaking the 20.2 law (on public gatherings). They did not say anything, they just put us in a van and drove us away," she said.

A Moscow court earlier this month sentenced the activists to 15 days in police cells and also banned them from visiting sports events for three years.

The four ran onto the pitch at Moscow's Luzniki stadium in the second half of the World Cup final between France and Croatia, watched by President Vladimir Putin and world leaders including French President Emmanuel Macron.

They said it was a protest against Putin and issued a list of political demands, including freeing political prisoners and ending arrests at peaceful rallies.

Pussy Riot is most famous for performing an anti-Putin protest song in a central Moscow church in February 2012.

Three of the group's members were convicted of "hooliganism motivated by religious hatred" at a trial that attracted global media attention and drew protests from rights groups.

Group members Nadezhda Tolokonnikova and Maria Alyokhina were released after serving 22 months of their two-year sentences. The other convicted member Yekaterina Samutsevich was given a suspended sentence.