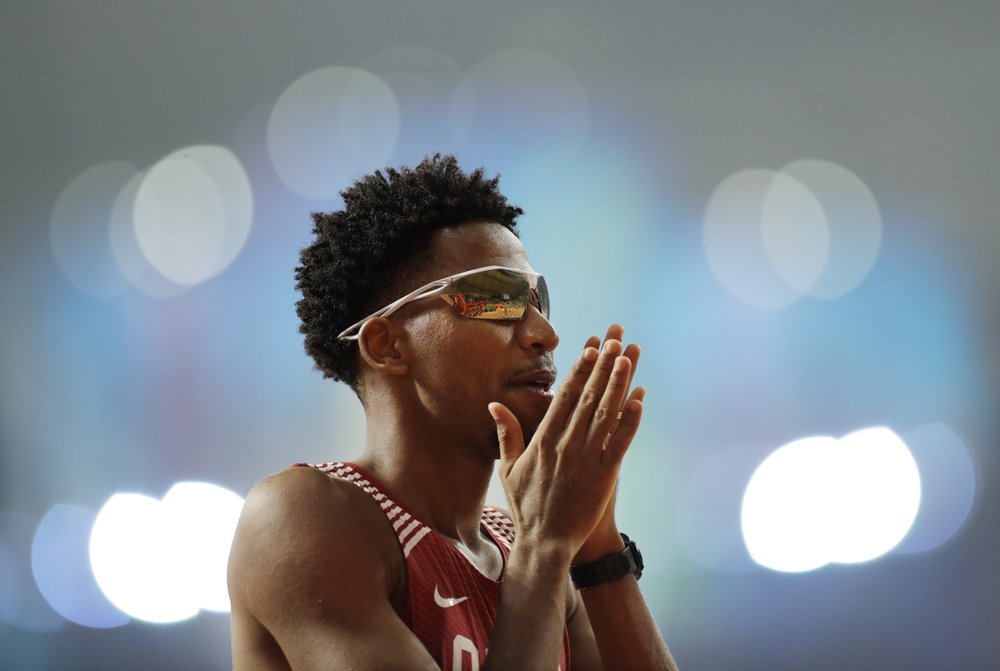 Just as migrant workers built Qatar’s stadiums, a foreign-born medalist is building its reputation in the track.

Abderrahman Samba’s bronze in the 400-meter hurdles Monday was the first Qatari medal at the world track championships and sparked joy in the VIP enclosure, the one part of the stadium where local fans were dominant.

“Today when they say my name, everybody starts screaming,” Samba said. “I say to myself, ‘Just go, man.’”

Samba was born in Saudi Arabia and competed for his father’s home nation of Mauritania in Africa before getting a Qatari passport in 2015, just five months after moving to the country. Such nationality switches are a sore point for track’s international governing body.

For years the IAAF has been trying to shut down what its council member Hamad Kalkaba Malboum likened in 2017 to a “wholesale market for African talent.”

“You can’t have athletes being traded, it’s bordering on trafficking if you’re not careful,” IAAF president Sebastian Coe told The Associated Press in August. “I’ve had member federation presidents who have said to me openly that they were waking up to emails from people saying ‘We’ve got so and so (who) is available for ...’ You can’t have that.”

Qatar’s team has athletes originally from at least six other countries including Britain, Nigeria and Egypt. Qatar offers athletes advanced training facilities and a chance to shine. The new arrivals generally don’t have prior ties to the nation.

In a country where native Qataris are vastly outnumbered by migrant workers, whether Bangladeshis on construction sites or service workers from the Philippines, relying on imported talent is nothing new.

Qatar’s two-time Olympic high jump medalist Mutaz Barshim was born in the country, but sometimes Qatar and other nations seem to behave like professional soccer clubs rather than national teams.

The IAAF has reported Ashraf Amjad Al-Saifi was “spotted” when winning the Egyptian youth title in hammer throw aged 15 and handed a Qatari passport a few months later in 2011. New IAAF rules aim to prevent a repeat with a three-year waiting period to compete for a new nation.

In the Kenyan town of Iten, known as the “University of Champions” for training star distance runners, Qatar promised to build a stadium after naturalizing Kenyan runner Stephen Cherono, later known as Saif Saaeed Shaheen. The track was to bear the tartan pattern found on local people’s cloaks.

Although Shaheen brought Qatar onto the international track stage with world championship gold medals in 2003 and 2005, no stadium was ever built.

Renato Canova, an Italian distance coach who formerly trained Qatar’s team and now works in Kenya, argues athletes have the right to switch to escape tough competition for squad places at home.

“The country, of course, is not happy when you change citizenship, but the point of view is the individual point of view. It’s not that the federation here is guilty, there are thousands of athletes, and it’s not possible to assist everybody,” Canova told The Associated Press.

“When we speak about World Championships and Olympics, those that involve all the world, then the athletes have the right to go.”

In 2017, the IAAF froze all nationality switches in track and field. One of its concerns was that athletes were being traded by influential agents, without much say over which country they represented.

The IAAF has also fought to ensure naturalized athletes get full citizenship rights. That didn’t always happen in the past, leaving them at risk of being abandoned if their performances dropped.

There are signs that the pressure on some naturalized athletes leads them to break the rules. Since June, two Africa-born athletes for Bahrain have been banned for doping, including Olympic marathon silver medalist Eunice Kirwa. A third was pulled from worlds for an investigation into missed drug tests.

The Netherlands has Sifan Hassan, who arrived from Ethiopia as a 15-year-old refugee and gained Dutch nationality five years later. On Sunday, she became world champion in the 10,000 meters.

Born in Iten, Paul Chelimo won the Olympic silver at 5,000 for the United States but had to serve in the US Army on his way to gaining citizenship.

Speaking during training Kenya before the world championships, he was sure he made the right choice. “I’m happy I made the decision because I would not have had such a good chance here.”