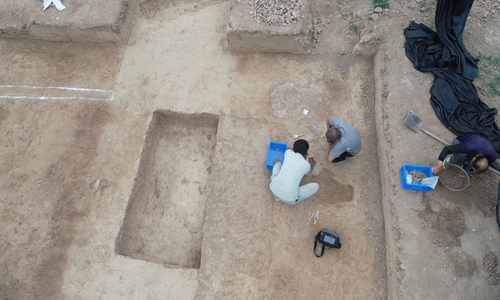 Chinese archeologists have discovered the remains of a workshop for stone armor buried with the First Emperor of Qin Dynasty (221BC-206BC) in his mausoleum with the Terracotta Army.

The discovery broadens the production sites of burial objects of the First Qin Emperor and offers new insights into the functions of the Qin Dynasty capital.

"This is the first time we know that burial objects could be produced in the capital," said Xu Weihong, leader of the archeological team.

Newly found sites of stone armor production are located in the ancient capital of the Qin Dynasty in Xianyang, Northwest China's Shaanxi Province, about 40 kilometers from the Mausoleum of the First Qin Emperor, according to a document the Shaanxi Provincial Institute of Archeology sent to the Global Times on Thursday.

The document said archeologists found stony plates of armor in the grass around a relic of a high-platform building considered to be the center of the palace in the Qin Dynasty capital.

The sites of workshops and drains were also discovered. Researchers found many materials to produce stone armor, such as rocks and cooper bars to connect every part of the armor. Drills, knives and milestones were also dug out.

Some plates of the armor were almost completed and their surface had been polished. To fit the contours of the human body, the plates were shaped into a micro arc, the document said.

Researchers also found Chinese characters carved on some plates. These characters are similar to those on the stone armor dug out from the Mausoleum of the First Qin Emperor.

The Mausoleum of the First Qin Emperor, discovered by chance by farmers in 1974, took more than 38 years to construct, and is located beneath a 76 meter-tall tomb.

The mausoleum is known for its over 7,000 life-size terracotta statues of warriors and was included in the World Heritage List in 1987.