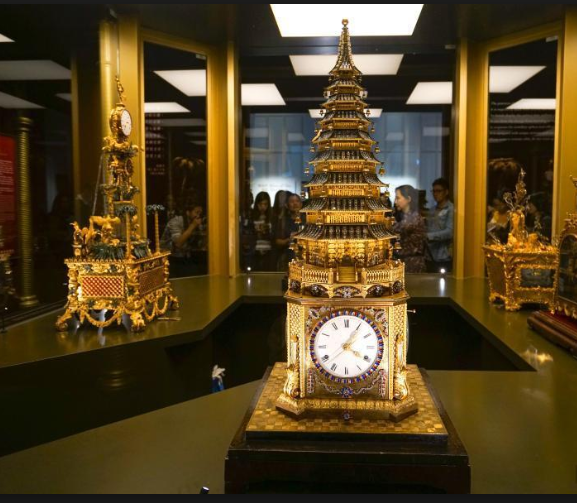 The clocks that entertained and kept time for China's emperor are now TICKING again. The painstakingly repaired timepiece of the Qing Dynasty Emperor Qianlong, is one of 120 clocks and watches from The Palace Museum in Beijing now on display in Hong Kong. The "Treasures of Time" exhibition features pieces that are not only rich in historic value, but also reveal the sophisticated craftsmanship of the period. Our correspondent Zhu Dan files this report from Hong Kong.

Day and night. Their endless movements came from a great distance and date back two hundred years. The "gilt bronze clock with a country scene and water automaton" was a tribute from Britain to China's emperor in the 19th century. It shows a village scene featuring a farmhouse, water wheel and animals. After activation, the music plays, the water-simulating glass rods revolve, the figures move, the wings of a hen and chicks flap and the neck of a goose flexes.

The piece is now on display at the "Treasures of Time" exhibition, which is now being held at Hong Kong Science Museum. The show features 120 clocks and watches from the collection of The Palace Museum, including antiques made in China as well as items received from Britain, France and Switzerland.

CHAN SHUK MAN, DIRECTOR HONG KONG SCIENCE MUSEUM "It demonstrates the significant culture and technology exchange between China and western countries in the 19th century. We would like to enable visitors to know the working mechanism of these magnificent clocks, and also let them learn more about the science behind these timekeeping devices. Alongside the treasures, special features with the latest technology, animations, models and interactive exhibits have been created."

ZHU DAN HONG KONG "I'm now winding up the exhibit, giving it some spring-like energy. It's now ready in position and by simply letting go, the energy is released, bringing life to the display. Designed by the Hong Kong Science Museum, we can see how this machine's clocks work. Winding and unwinding, it tells the time every hour."

The Qing dynasty even set up a clock-making unit under the imperial workshops to make clocks and watches according to the emperor's specifications.

There are nearly 1,600 timepieces in the collection of The Palace Museum – all hailing from the Qing dynasty.

It takes great care and an extra dose of patience to look after the pieces, some of which have never been touched up or repaired for more than a century.

Restoring them to their former glory requires a set of rather extensive procedures, and training the next generation of artisans and ensuring that the skills of repairing antique timepieces are not lost is also crucial to maintaining the tradition of ancient timekeeping. Zhu Dan, CGTN, Hong Kong.