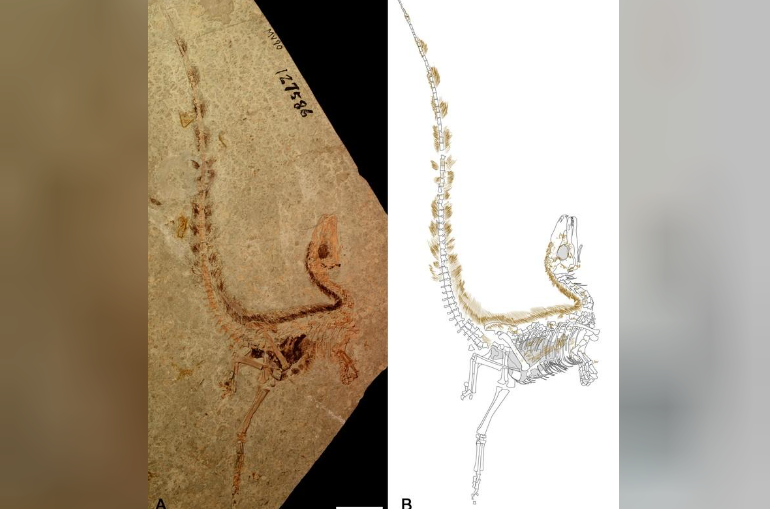 A raccoon-sized, feather-clad dinosaur that roamed China 130 million years ago shared a distinctive trait with the furry modern mammal that topples trash cans in North America: a stripe across their eyes resembling a bandit mask.

Scientists said on Thursday an analysis of fossilized feathers on the dinosaur called Sinosauropteryx revealed a camouflage pattern that included the bandit mask, a light-colored underbelly, dark-colored back and a striped tail.

Its color pattern also hinted at the environment Sinosauropteryx inhabited: an open savannah rather than a forest, the researchers believe.

“This was quite a surprising discovery,” paleontologist Fiann Smithwick of the University of Bristol in Britain said of the bandit mask.

That feature may have given Sinosauropteryx certain advantages. In birds, the evolutionary descendants of dinosaurs, a bandit mask pattern often obscures the eyes. Predators and prey look for eyes as a giveaway of an animal’s presence, Smithwick said.

“The color patterns we found are all known to be associated with camouflage in modern animals, and so it is likely that Sinosauropteryx was under strong predation pressure as well as needing to hide from its own prey. It was likely both the hunter and the hunted,” Smithwick added.

Sinosauropteryx measured about 3.5 feet (1 meter) long, was two-legged with short arms, large thumbs and a very long tail, and was covered in filament-like feathers. Previous research indicated its dark feathers were brownish-red. It possessed small, sharp teeth, and ate small vertebrates like lizards.

“It would have looked like a skinny version of a raccoon mixed with a turkey,” said University of Bristol molecular paleobiologist Jakob Vinther.

Scientists’ ability in recent years to identify color patterns in fossilized dinosaur skin and feathers has boosted the understanding of these bygone creatures.

The camouflage pattern seen on the side of Sinosauropteryx’s body is called countershading, which helps animals blend in with the background.

Animals inhabiting open environments like savannahs often have a countershading pattern like that of Sinosauropteryx that transitions dramatically from dark to light high on the side of the body, the researchers said. Forest animals typically have countershading that changes from dark to light much lower and more gradually on the side of the body.

“We know that at least two other dinosaurs had countershading, neither of which were feathered, so it seems that it was a common color pattern,” Smithwick said.