Railway workers recap train development in China since reform of 1978 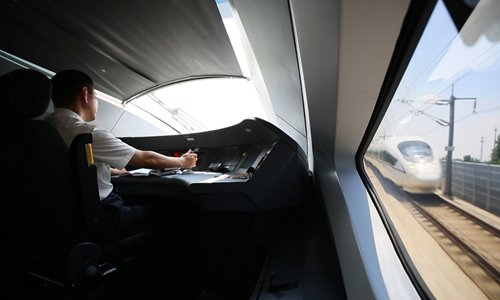 Railway workers at Ji'nan West High-speed Railway (HSR) Station, a key stop along the Beijing-Shanghai HSR line, share with the Global Times a personal account of the Chinese railway industry's development during the four decades following China's reform and opening-up in 1978. From an underdeveloped industry to a world-leading public service, the industry is developing fast and laying solid foundation for China's economic growth. Achieving profitability only six years after its launch, the Beijing-Shanghai line is the world's fastest railway line in commercial operation.

Rising up from a smart mattress, 51-year-old Xue Jun turns to a monitor that records the quality of his night's sleep.

After the monitor produces a detailed brief on how many flops he turned during the night, his blood pressure and heartbeat, his physical readiness as a train driver is confirmed.

Dressed up in uniform wearing a smart captain's hat, he waits patiently for a car to pick him up and take him to work - the cockpit of the world's fastest bullet trains.

That's how a day starts for Xue, a driver of the Fuxing electric multiple unit (EMU) trains, China's bullet train for the New Era.

Different from most of his colleagues, Xue's career started in a seemingly archaic but not so distant past.

In 1986, at the beginning of his career, Xue was on a mission to learn how to balance himself inside a swaying steam locomotive cabin and shovel a spade of coal in a perfect swoop so that the fuel burned evenly inside the furnace of the train's boiler.

By 1994, Xue was occupied with mastering the art of electric engineering and how to work with diesel engines, as he had upgraded to become a driver for a diesel engine-powered locomotive.

In 2006, an electrification upgrade was successfully completed on the Beijing-Shanghai railway line. Xue soon learned how to operate an electric-powered locomotive, mastering the use of a pantograph and understanding insulation precautions to prevent injuring himself from a 270-kilovolt power line.

Xue told the Global Times that it was the pursuit of speed that got him this far.

When Xue obtained his license for the diesel locomotive in 1991, he thought that he was satisfied enough and that the license would be his "rice bowl for life." And then he encountered the bullet train.

In 2008, Xue was driving his electric train at a speed of 160 kilometers per hour near Huangcun, a railway stop in southern Beijing.

"Then, all of a sudden, flash and thunder! A bullet train passes by my train. In a moment's time, all I could see was the twinkling tail light of that train. In another moment's time, there was nothing but shimmering tracks," Xue told the Global Times on Wednesday inside a railway depot in Ji'nan, capital of East China's Shandong Province.

"Running this fast, it must feel really good," Xue said to himself.

It was then that Xue made the decision to be a bullet train driver. It would take him one year, many tests, interviews, a month of training sessions and one failure before he got what he wanted.

In 2009, after this rigorous training, Xue finally became qualified to drive China's bullet trains, the fastest trains in the country's railway system.

"When the bullet train was first introduced, there were so many people that yearned to just have a look at these trains, not to mention taking a ride. And I was driving it," Xue said.

Today, the EMU is a daily necessity for the Chinese.

In July and August alone, 393 million people traveled on EMUs, according to China Railway Corp.

Sixty-year-old Zhao Jianjiang will retire in a few months. Zhao has spent 43 years working in China's railway system, meaning he was in the train-related workforce even before the reform and opening-up policy was launched in 1978.

In Zhao's four-decades-long career, he has taken up a wide range of posts including switch operator, inspector, dispatcher and station chief.

Each one of those posts is vital to the functioning of China's railway system.

His first post, Zhao recalled, was at a 108-kilometer-long railway section linking Jining and Hezhe, two cities in Shandong. Against the norm of China, that railway was not operated by the State-owned railway operator, but by the Shandong provincial government.

The line was incorporated under the wings of the State railway in 1996, the year the north-south artery of the Beijing-Kowloon line opened.

"When I began working as a young man, I was assigned to manage the switch, which allowed the train to change lines, and I had to pull the manual gear with all my strength and use a kerosene lamp to signal the train," Zhao said.

"Then, the switch was upgraded, still requiring manual work but powered by electricity. And since then, no one has ever had to manage the switch in such way. Line changes are now dictated by a control center at a railway operator information hub," Zhao said, noting the evolution from decentralization to centralization.

And there were uniforms, too, he said. In the 1980s, station staff members were given what is called a "Lenin coat" -  measured using sizes 1 to 9 like those in the military.

"We often ended up being dressed in too large a coat, and looked sloppy in it. Our uniforms are tailor-made today, so that when we are in service, we look sharp," Zhao said.

Speaking about his vision for the future of China's railway industry, Xue did not seem too excited about the news of a 1,000-kilometer-an-hour super-high-speed train. "Speed itself should not be mistaken as the goal; we pursue speed, because it is backed by demand."

He noted that the lifting of speed would in turn increase the cost of operation, both in terms of electricity supply and extra work to ensure safety, which would rise significantly and sometimes disproportionately.

Zhao said the future of transportation will be marked by the integration of HSR railway networks with expressways and subways.

Due to Ji'nan's complex underground water table, the city's subway development has for years lagged behind others, but a new subway line is finally being constructed to link Ji'nan West HSR Station with the city's center, streamlining the journey from home to the station.

Li Yang, a staff member working at Ji'nan West HSR Station, said there were only 86 high-speed train services a day when the station opened in 2011, but now the number is approaching 333.

"And our province will soon add a new HSR between Ji'nan and Qingdao. If a train could run at 200 kilometers per hour, it could be considered a high-speed train in many countries and regions. But we want trains running at a speed of 350 kilometers on the Ji'nan-Qingdao HSR, as locals feel that if they were slower, it would strangle the development of the province."