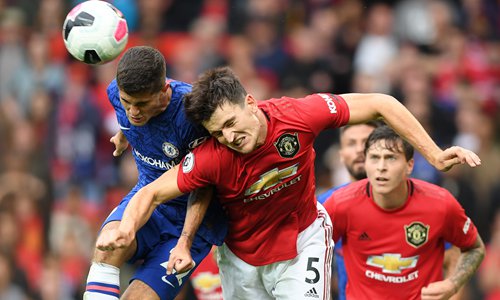 Christian Pulisic (left) of Chelsea battles for a header with Harry Maguire of Manchester United on Sunday in Manchester, England. (Photo: VCG)

Marcus Rashford scored twice as Manchester United made the perfect start to their Premier League season by inflicting a 4-0 defeat on Frank Lampard in his first match in charge of Chelsea on Sunday.

Ole Gunnar Solskjaer's men were in need of a fast start to the campaign to erase memories of a terrible end to last season and got it.

Rashford's early penalty opened the scoring against the run of play, but three goals in 16 second-half minutes from Anthony Martial, Rashford and debutant Daniel James had Old Trafford in raptures.

Harry Maguire and Aaron Wan-­Bissaka also impressed at the back on their debuts after United spent 130 million pounds ($156 million) on the pair over the summer to shore up a defense that conceded 54 Premier League goals last season.

"It is a great start for myself and the team. We rode our luck a bit first half but second we were much more ourselves," said 80 million pound signing Maguire after his first game as the world's most expensive defender.

However, questions will be asked of Chelsea's decision to let experienced defender David Luiz leave to join Arsenal earlier this week as the Blues struggled to contain the United counterattacks despite dominating long spells.

Lampard's first-team selection was a bold one as he put his faith in youth with Tammy Abraham and Mason Mount handed starts. Chelsea were banned from making new signings over the summer and Lampard also has a number of senior players out injured, but refused to make excuses.

Chelsea started the better as Abraham smashed a shot from the edge of the box off the post, but the heart of Lampard's defense always looked fragile.

Kurt Zouma had already gotten away with gifting possession to Martial on the edge of his own box as the Frenchman shot weakly into the arms of Kepa Arrizabalaga before he was turned easily by Rashford and hauled the England striker to the ground. Rashford dusted himself off to blast the penalty high past Kepa to open the scoring.

United needed David de Gea to recover his best form as he made fine saves from Ross Barkley and Emerson Palmieri, while the Italian international also blasted off the inside of the post.

But at the other end, Rashford and Martial provided the clinical touch to kill the game off in the space of 60 seconds that Chelsea lacked.

Martial bundled the ball home at the far post from Andreas Pereira's cross and Paul Pogba then played provider with a brilliant ball over the top for Rashford to burst in behind before coolly slotting past Kepa.

Pogba was the creator again for the fourth as the Frenchman played a one-two with Rashford and powered through the Chelsea defence before laying off to James, who got the benefit of a big deflection to find the bottom corner.