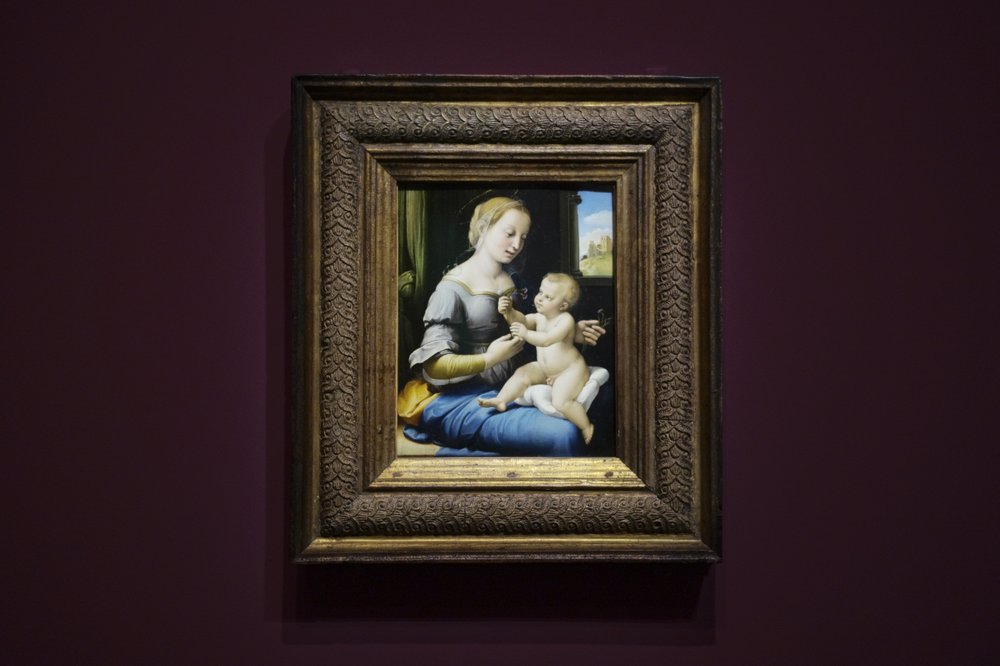 The painting ‚Madonna of the Pinks' of Renaissance artist Raphael from London's National Gallery is on display at an exhibition at the Gemaeldegalerie in Berlin, Wednesday, Germany, Dec. 11, 2019. (Photo: AP)

Berlin is opening the first of three Raphael exhibitions this week as the art world celebrates the 500th anniversary of the Renaissance master’s death next year.

Five paintings of the Virgin Mary and her son that are usually not exhibited in the same space are all on display in one room at the city’s Gemaeldegalerie museum. In addition, Raphael’s famous “The Madonna of the Pinks” will be on loan from the National Gallery in London for the exhibition called “Raphael in Berlin. The Madonnas of the Gemaeldegalerie.”

The six paintings belong to Raphael’s early works from the beginning of the 16th century and depict Madonna and her child in different variations. One shows Jesus on his mother’s lap with pink flowers in his hands, another with a goldfinch on his leg. In most of the paintings Mary has a solemn look as if she already knew about her son’s fate.

The exhibition’s centerpiece is a tondo, or round painting, called “Terranuova Madonna” from about 1505 that Raphael created shortly after his arrival in Florence. It shows Madonna with her child, surrounded by the infant St. John and an unknown child with a halo.

“The big Raphael year 2020 is already starting in Berlin in December 2019,” the director of the Gemaeldegalerie, Michael Eissenhauer, told reporters on Wednesday. “The show gives a precise view of Raphael before he became the star artist at the Vatican.”

Raphael was born in 1483 in Urbino and died at the age of 37 in Rome. Together with Michelangelo and Leonardo da Vinci, he is one of the most famous Italian artists of the Renaissance period.

The presentation takes a historical look at the collection of the Berlin museums, showing works by the “young Raphael” that were widely popular when the first museum was founded in the city in 1830.

The exhibition also sheds light on the early acquisition policies of the Gemaeldegalerie in the broader context of the history of art collecting in Europe and it shows the image that 19th-century Germany had of Raphael.

The exhibition opens to the public on Friday and runs through April 26.