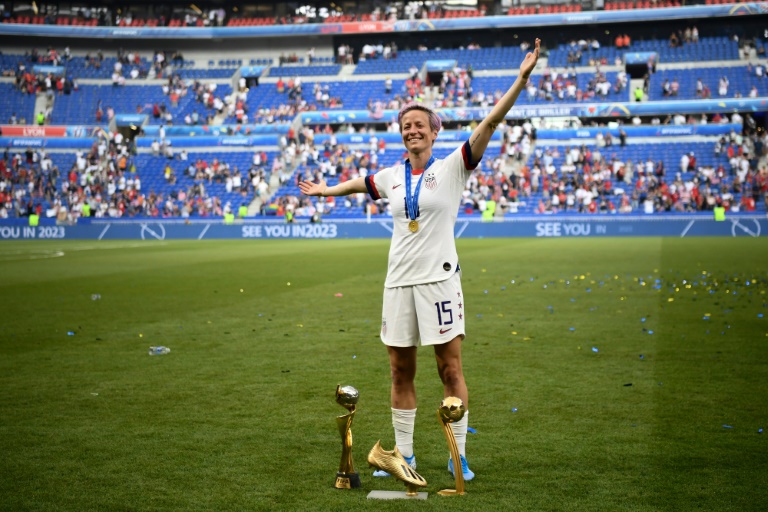 Megan Rapinoe won matches on the pitch and hearts off it during the women's World Cup. (Photo: AFP)

If there is one person to come out of the tournament with their profile raised to that of a global star it's Megan Rapinoe, winner of the Golden Ball and Golden Boot as she conquered her second World Cup on the pitch and won hearts off it.

The 34-year-old, who broke the deadlock from the penalty spot on Sunday, became the face of the tournament for her decisive performances and the way she handled being attacked online by Donald Trump.

Rapinoe scored braces in the USA's wins against Spain and France before being ruled out of their triumph over England in the semi-finals with a hamstring injury.

Her double against France came in the middle of a media storm after her comments about not going to the White House elicited a furious reaction from Trump, who accused her of disrespecting the country.

Rapinoe did not back down and became an icon with her commitment to social justice, goals and what she described as a "shit-eating grin".

Trump's congratulatory message for the USA team on Sunday is unlikely to change her opinion of the president.

It was fitting that the penalty from which Rapinoe scored in the final came from a VAR-assisted decision following a tournament in which the video technology and the application of new laws have attracted criticism.

After a relatively smooth use of VAR at the men's World Cup last year, there were accusations that FIFA were using the women's tournament as a testing ground for law changes.

VAR punished several goalkeepers for stepping off the line at spot-kicks, while razor-thin offside and penalty decisions proved decisive in matches as big as the USA's semi-final win over England.

First Ellen White's leveller was chalked off for offside by what looked like millimetres, before VAR gave her a penalty for a foul that slipped by the referee -- a spot-kick missed by Steph Houghton.

Scotland were hit hardest with VAR spotting minimal infractions from goalkeepers on penalties, as Florencia Bonsegundo's retaken kick following her missed first effort sealed a comeback from three goals down for Argentina to draw 3-3 and dump the Scots out.

Criticism of women's football before this World Cup often centred on the quality of the goalkeeping, but France has seen a number of world-class displays from stoppers, the Netherlands' Sari van Veenendaal chief among them.

Incredibly the 29-year-old is without a club after leaving Arsenal but will surely have suitors queueing up after star turns in the extra-time semi-final win over Sweden and in the final.

Van Veenendaal's vanquished last-four opponent, Hedvig Lindahl, also shone. The Swede's spectacular save from Vivianne Miedema's powerful header in that game was a highlight before she was eventually beaten in extra time.

Chile's Christiane Endler was described as "world-class" by USA coach Jill Ellis after a stunning display in a 3-0 defeat to the holders.

England coach Phil Neville also noted the improvements in goalkeeping after Argentina's Vanina Correa kept the Lionesses down to one goal with a display that included a penalty stop from Nikita Parris, highlighting what can be achieved with increased access to specialised coaching.

Marta asks for 'smiles at the end'

Widely recognised as the best ever female footballer, Marta cemented her status as a great by becoming the all-time leading scorer in any World Cup on 17 goals with a penalty against Italy.

The Brazilians were eliminated by France in the last 16 but the 33-year-old was again the story after her impassioned plea for women in her home country to take up the game and carry the baton after she, 41-year-old midfielder Formiga and 34-year-old striker Cristiane retire.

"You have to want more, train more, be ready to play 90 minutes, plus 30 minutes extra time and every minute. This is what I ask the girls," she said.

"Formiga is not forever, neither is Marta, neither is Cristiane. Women's football depends on you to survive. Think about it, Value it more.

"Cry at the beginning so you can smile at the end."