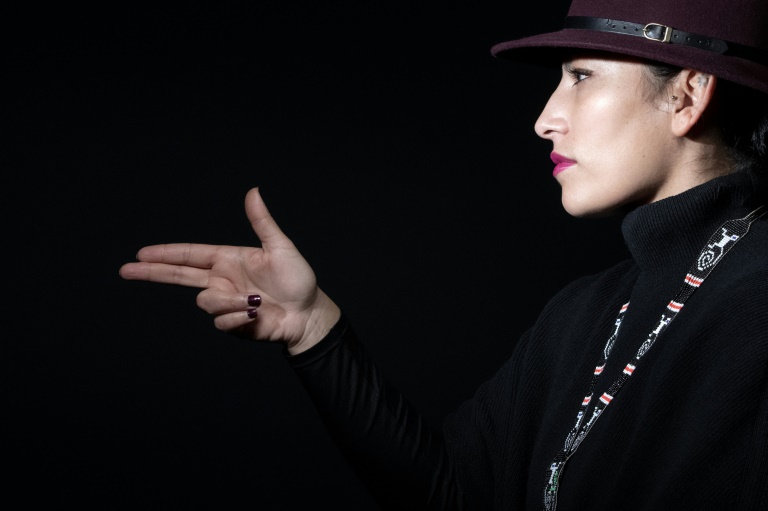 Ana Tijoux is just as angry as the protesters at the inequalities in her country.(Photo: AFP)

Chilean singer Ana Tijoux says she is scared of cameras. Yet it is hard to think of anything as fearless as her latest hit "Cacerolazo", which has become an anthem of the street revolt in her homeland against its billionaire president Sebastian Pinera.

Latin America's richest country has been rocked by more than six weeks of protests sparked by a 30 peso (four US cents) rise in metro fares.

Demonstrations often start with people banging pots and pans, an action known as a "cacerolazo", after the Spanish word for a casserole.

Tijoux -- who Rolling Stone magazine has hailed as the "best rapper in Spanish" -- is just as angry as the protesters at the inequalities in her country.

And she says she is totally behind their calls to end privatization and rewrite its constitution, which dates from the 17-year dictatorship of General Augusto Pinochet.

"It's not 30 pesos, it's 30 years," she raps in the song, referring to the fare rise. "The constitution and the tax breaks for the rich / With our fists and spoons we are bashing the establishment / and the state, cacerolazo!"

Tijoux said she had long expected an explosion of anger from the poor and middle classes.

"There was always a lot of popular discontent but before they weren't aligned -- there was not this union of rage which is real and totally valid," she told AFP in Paris, where she was born after her parents fled Chile during the dictatorship.

The 42-year-old, who had moved back to France with her two children before the protests erupted, wrote the song after bumping into a Chilean neighbor and film-maker who had returned from shooting the protests.

"We said to each other that we had to do something," she said, and the rap poured out.

Her music has since featured in the US television series "Breaking Bad" and even the Fifa 11 video game.

Tijoux said she was in awe of the students leading the protests, which have also focused on the paucity of education and healthcare provided by the state in Chile, a longtime laboratory for neoliberal economics.

The students are "much more politicized" than their parents, she said, and insisted that "political consciousness is the most beautiful thing that can happen to each and every one of us".

"They are not contaminated with the fear we had of the dictatorship," she said, adding that the impunity enjoyed by the military for crimes committed under Pinochet helps keep this fear alive.

"There is an open wound in Chile. There is a pending debt with respect to justice," Tijoux said.

But she also said the unrest is a part of "global discontent about inequality", many people living in societies where "the rich are getting richer, and the poor are getting poorer".

Mounting anger across the world was a "response to a political and economic system that does not respond to people's needs", she added.

Tijoux is reluctant to claim her song as an anthem of revolt, saying its real hymns are the protest songs of legendary artists like Victor Jara, who was tortured and killed by Pinochet's henchmen in 1973.

"We are the grandchildren of this wave of people we have heard all our lives, and who are part of our political and cultural history," she said.

Latin Americans, she said, "have always lived under the yoke of colonialism", adding: "It is a continent but it is like one great homeland that has always had a very strong political response."