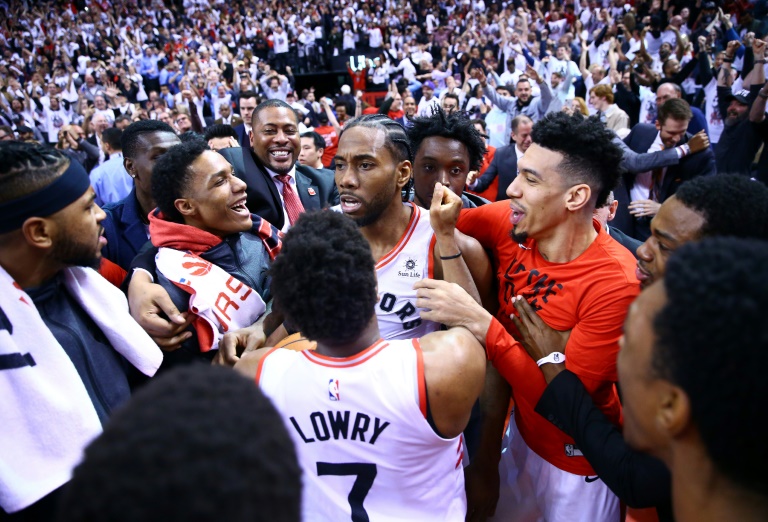 Kawhi Leonard bounced in the game-winning shot at the buzzer as the Toronto Raptors advanced to the Eastern Conference finals with a 92-90 win over the visiting Philadelphia 76ers in a heart-stopping game seven on Sunday.

The winner-take-all contest was a microcosm of the wildly unpredictable series with each team taking turns making runs or being inept until the biggest twist of all as Leonard finished it off in showstopping style.

"I got a fortuitous bounce," said Leonard of the first game-seven buzzer beater in NBA history. "I just shot it as hard as I could. I got some loft on it and it made the ball bounce soft and it ended up going in."

The Raptors advance to the NBA final four where they will play the top-seeded Milwaukee Bucks in game one of their series on Wednesday.

With the score tied 90-90 and the game appearing to be headed to overtime, Leonard took matters into his own hands by getting open for a fall-away jumper from the right corner.

His arching moon ball at the buzzer bounced twice on each side of the rim before dropping into the bucket to clinch the series.

Leonard finished with a game high 41 points while Pascal Siakam tallied 11 points and 11 rebounds for the Raptors, who are hoping to reach their first NBA finals in franchise history.

Toronto has leaned heavily on Leonard all season, and on Sunday he delivered. Serge Ibaka had 17 points, Kyle Lowry chipped in 10 and Marc Gasol grabbed 11 rebounds.

Joel Embiid led the Sixers attack with 21 points and 11 rebounds and Tobias Harris had 15 points and 10 rebounds.

The Raptors were up 89-85 with 74 seconds to play on a steal by Lowry, who set up Siakam for the layup.

Leonard had a chance to give Toronto a three-point lead but made just one of two free throws with 10 seconds remaining, and Butler tied the score 90-90 on a desperation driving layup.

"I was disappointed I missed that free throw," Leonard said. "So I really wanted to make that shot. I wanted to leave it all out on the floor just in case we lost so I would have been proud of myself."

CJ McCollum carried the load in the other winner-take-all NBA playoff game on Sunday night, as the Portland Trail Blazers also won a tight game seven over the Denver Nuggets 100-96.

Portland rallied on the back of McCollum's 37 points to stun the Nuggets in Denver and book a Western Conference finals date with NBA champions Golden State.

With Portland star Damian Lillard struggling to get shots to fall, Denver exploded out of the gates, seizing a 29-17 first-quarter lead that they stretched to as much as 17 in the second period.

McCollum kept the Blazers in it, his driving basket giving them their first lead of the game, 71-70 with 12 seconds left in the third quarter.

The Nuggets had reduced a seven-point deficit to one when McCollum drained a step-back jumper with 12.4 seconds left to stretch Portland's lead to 98-95.

Evan Turner, who scored just four points in the first six games of the series, scored 10 of his 14 in the fourth quarter for Portland.

After Nikola Jokic's last-gasp three-point attempt hit the rim Turner grabbed the rebound and the clock ran down.

Despite the third-quarter departure of Rodney Hood with a hyperextended knee, Portland booked their first trip to the conference finals since 2000.

They'll open their best-of-seven series against the Warriors on Tuesday with a place in the NBA finals on the line.

Despite his shooting woes, Lillard contributed with 10 rebounds and eight assists to go with his 13 points. He connected on just three of 17 shots from the floor -- but that included two three-pointers in the fourth quarter.