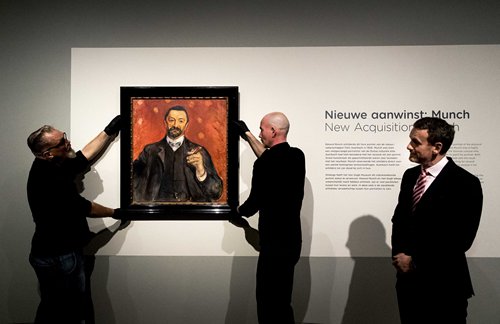 Two workers reveal the portrait of Felix Auerbach, a German physicist from 1906, by Norwegian artist Edward Munch at the Van Gogh Museum in Amsterdam on Tuesday. Photo: IC

Amsterdam's Van Gogh Museum unveiled a rare new purchase on Tuesday, painted by Vincent's contemporary Edvard Munch, the only portrait by the Norwegian artist on display in The Netherlands.The Portrait of Felix Auerbach, created by Munch in 1906 was bought for an undisclosed amount from a private collection, Van Gogh Museum director Axel Rueger told journalists."It's the only portrait by Munch in a Dutch collection," a beaming Rueger said as the painting was being hung at the museum - exactly 74 years after Munch's death.It's also the first time the picture goes on display at the popular museum, which drew a record 2.26 million visitors last year, making it one of the most-visited attractions in the country, Rueger said.Munch was commissioned in 1906 to paint the likeness of the famous German physicist Auerbach while the scientist was working as a professor at the University of Jena in central Germany. He was paid 500 marks for the job.It depicts a self-assured Auerbach, with a steady gaze and holding a cigar, on a vibrant red background and is considered to be one of the best portraits by Munch in the early 20th century, Van Gogh Museum curator Maite van Dijk said.Munch, best known for his seminal painting The Scream, drew much of inspiration from Van Gogh, whose works he saw around 1890, although it was unlikely that the two ever met, the Van Gogh Museum added."Just like Van Gogh, he [Munch] strived towards modernizing art and both developed a colorful and expressive way of the universal emotions found in human existence," it said.The Van Gogh Museum in 2015 hosted an exhibition called Munch: Van Gogh in which the parallels between the artists were highlighted.Although the painting of Felix Auerbach is the only personal portrait by Munch on display in the Netherlands, it is one of two Munch canvasses in the country.The other Munch is called Two Girls under an Apple Tree in Bloom and can be seen at Rotterdam's Museum Boijmans Van Beuningen.