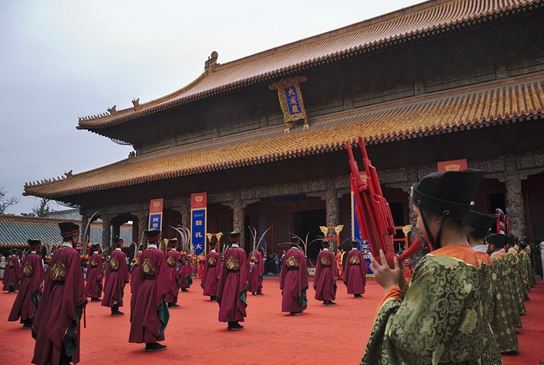 The city of Qufu, hometown of Confucius, holds a grand ceremony celebrating the 2,568th anniversary of his birth on Sept 28, 2017. (Photo: VCG)

A fair for promoting reading as a lifestyle was held Monday in the city of Qufu, the birthplace of Confucius, in East China's Shandong province.

Nearly 100 experts and book lovers attended the event held before the World Book and Copyright Day, which falls on April 23.

Confucius was known for his contributions in editing and compiling the Six Classics, which later became a must-read for scholars attempting to graduate in state examinations in ancient China.

"Confucius has preserved the spark of book culture," said Kong Xianglin, a 75th generation descendant of Confucius, during the event.

Over 1,000 Confucius descendants have handed down their writings, Kong said.

At the fair, experts also focused on the role of mothers in promoting reading.

The event was organized by the commission on reading culture studies under the Library Society of China, and the Advanced Institute of Confucian Studies in Shandong University.