XI'AN, Jan. 9 (Xinhua) -- On a cold night, 24-year-old Feng Jiachen puts on a Tang Dynasty (618-907) costume, moves side to side on a giant round-bottomed base before bouncing back upright like a "roly-poly toy," a doll that is self-balancing. 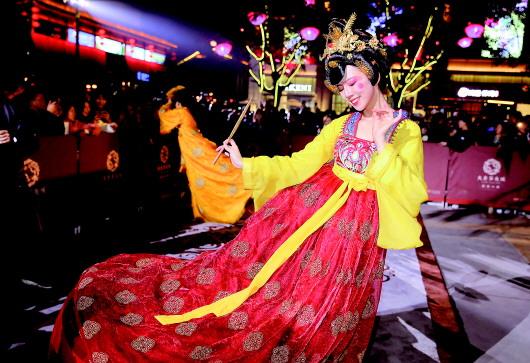 Feng became an internet sensation in China after her daily performance was recorded and uploaded on China's short video sharing platforms, in which she danced at a tourist spot in the northwestern Chinese city of Xi'an, the ancient capital of 13 dynasties including Tang.

Videos related to the topic of real-life "roly-poly toy" had been viewed more than 2 billion times by the end of November on Douyin, also known as Tik Tok, according to a report published this week by the video-sharing platform.

As an experienced dancer, Feng had not expected that she would become an online celebrity when she started performing as a real-life tumbler toy five months ago at the tourist attraction Datang Everbright City featuring a grand Tang street in Xi'an.

"To meet the demand of tourists, we have designed and arranged the steps and movements in our dances, and now have five performers," Feng said.

The five real-life "roly-poly toys," selected from more than 100 candidates, have to defy gravity as well as other challenges.

Dancers should stand on a hemisphere, with their waists and legs fixed on a T-shaped iron frame in the middle of the prop, and fasten the safety ropes before putting on their traditional costumes.

Moreover, dancers must keep their weight under 50 kg for females and 60 kg for males to maintain their balance so they can dance elegantly.

"I was afraid at the very beginning because I could not keep balance," Feng said. "I moved back and forth like a 'zombie.' Even doing simple moves, I bruised my waist many times during practices."

When the performers could skillfully control their movements, they began to perform classical dancing and Chinese martial arts to demonstrate the unique charm of Chinese culture.

The special performance made real-life tumbler an undisputed entertainment sensation. A woman even injured her spine while trying to imitate Feng's dance, according to media reports.

The real-life "roly-poly toys" are among the seven performance arts launched by the tourist spot, which attracts more than 100,000 tourists every night.

As more Chinese cities try to light up their night-time economy, performance art has become a novel way to attract tourists and promote their history, culture and food.

Rising fame has not only brought fans to Feng but also job offers from entertainment companies. But she rejected the offers.

"I hope to perfect my role in the current show and create better artworks for my fans," she said.