Mao Buyi, champion of  The Coming One. [Photo provided to China Daily]

Singer-songwriter Mao Buyi stands on stage, smiling shyly and gazing at his fans, who are gathering around and screaming out his name. Clearly, the round-faced young man is used to the scene and tries to make eye contact with as many fans as possible.

Last summer, the 24-year-old rose to fame after being crowned champion of reality show, The Coming One, produced and broadcast by Tencent Video.

His fans are attracted to his poetic lyrics and melancholic melodies, and the followers on his Sina Weibo account have grown from 100 to nearly 5 million.

On May 30, he released his debut album, Perfect Day. 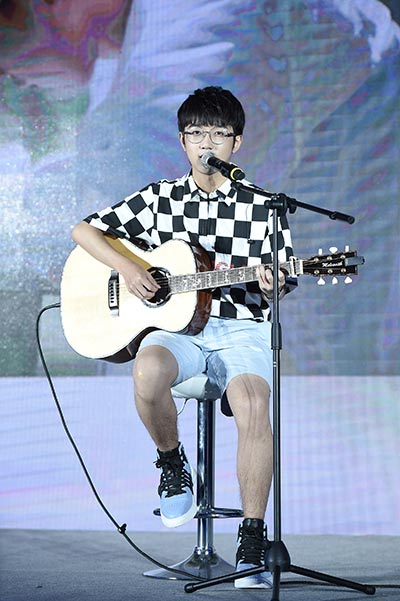 According to NetEase Cloud Music, one of China's top music live streaming services, the album recorded 1 million in sales within nine hours. So far, it has sold more than 4 million copies.

The album, produced by veteran singer-songwriter Li Jian and songwriter Zhao Zhao, features six songs, which are based on those performed by Mao Buyi during the reality show alongside six new ones he wrote himself.

After completing the album, Li wrote a message to Mao Buyi on his Sina Weibo saying: "From now on, you will face a lot of pressure as a professional singer-songwriter. You have to take responsibility for your music. You have to protect your talent by reducing unnecessary work, practicing your guitar skills and reading more." Speaking about his success, Mao Buyi says: "It happened so fast. I never expected to become a singer-songwriter.

"During the past year, I have been traveling to sing in different cities, such as at outdoor music festivals and shooting TV shows. The only holiday I have had was a 10-day break during the Spring Festival early this year."

Mao Buyi, whose real name is Wang Weijia, was born in Tailai county, Qiqihar, Heilongjiang province. He began writing songs two years ago when he started his nursing internship in a hospital in Hangzhou, Zhejiang province.

Then, every day after an eight-hour shift at the hospital, he would pick up his guitar after returning to the dormitory.

Although he had chosen nursing as a career, and was doing his last year at Hangzhou Normal University, he found that it was not suitable for him.

He says he felt numb and very depressed after seeing the suffering of his patients.

"Songwriting was a fun thing to do, and a great way to relieve pressure." 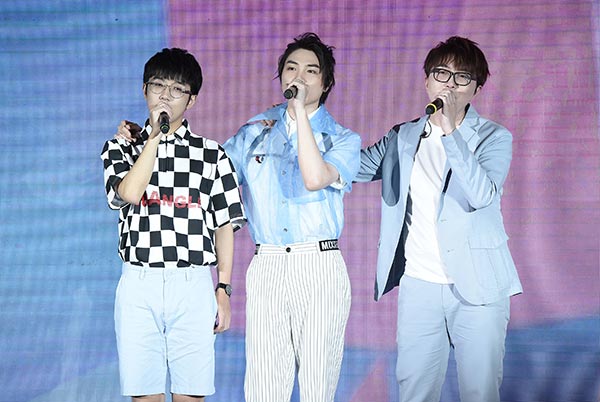 From right: Mao Buyi, champion ofThe Coming One, Liao Juntao and Zhong Yixuan, both performers on the show, see their music career take off, releasing their debut albums in late May. (Photos provided to China Daily)

Some of his hit songs, including Drink Sorrow Down and Perfect Day, were written during the internship.

Though he shared his original material online, none of the songs got much attention until he participated in the reality show.

He says that he applied to join the reality show, hoping to meet young people who, like him, are passionate about music and writing their own songs.

Winning the show was the last thing on his mind, but his success changed things.

When he returned home early this year to celebrate Spring Festival with his family, he found he was a celebrity in the small county.

"My father drank with me for the first time when we had dinner, and he seemed relieved that his son has grown up. He is happy that I enjoy the job that I am doing now," Mao Buyi says.

Asked about what he misses most about his life before achieving fame, he talks of the time of being alone in the dormitory and writing songs.

"I never expected that my songs would make money. They are very personal, just like diaries," he says. For now, Mao Buyi wants to slow down and concentrate on writing songs for his next album.

"I am still trying to figure out what kind of music I like most, and I want to do something that I have not done before.

"The first album is just a review of my life since I started writing songs. I am curious to see what comes next," he says.

According to Ma Hao, vice-president of Wajijiwa Entertainment, which co-launched The Coming One, besides Mao Buyi's debut album, the company also released two albums for young singer-songwriters Liao Juntao and Zhong Yixuan, both performers on the reality show.

Liao and Zhong, both in their early 20s, like Mao Buyi, wrote the songs for their debut albums.

Zhong's album, entitled The Summer of 17 Years Old, is dedicated to young students who are about to graduate from high school. The One by Liao comprises the singer-songwriter's live shows.

Speaking about the albums, Ma says: "These young people are talented. It's exciting to see that their songs are enjoyed and shared by young Chinese music consumers.

"Their success is encouraging for other young singer-songwriters."