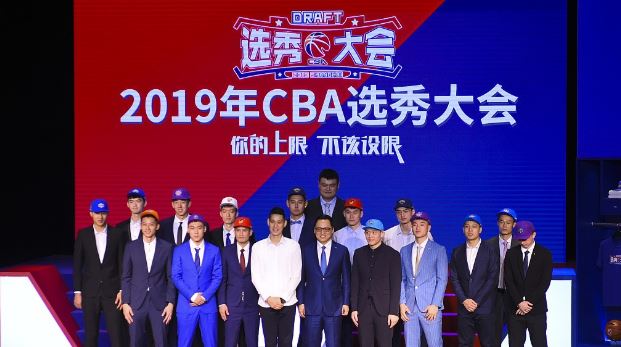 Peking University's Wang Shaojie was chosen by the Beijing Royal Fighters as the No. 1 overall pick in the fifth draft of the Chinese Basketball Association (CBA) in Shanghai on July 29, 2019. (Photo: VCG)

16 players were selected to join the league in the new season, the most in history.

The 23-year-old Wang has been on the radar of many teams thanks to his imposing combination of height (2.05 meters) and wingspan (2.13m). With professional-level speed, leaping and explosiveness, Wang went to the U.S. when he was a sophomore and played with NBA players like Julius Randle, Iman Shumpert and Joakim Noah in amateur basketball leagues.

"Many said I would be selected with the No. 1 pick but you never know for sure," said Wang who said he's looking forward to being coached by Stephon Marbury. Wang's size and style of playing reminded some of Giannis Antetokounmpo and Anthony Davis of the NBA, but when asked about that, the youngster said: "I don't want to be defined by others, I want to have my own style."

This was the first time that the draft was held with a real stage that made it look more like a ceremony. Yao Ming, president of the Chinese Basketball Association again hosted the draft and read the choices made by the teams. Before the event began, Yao told the youngsters in the audience that the draft is a part, not the end of their careers.

NBA player Jeremy Lin was also invited to the event as a guest. "I was not selected by any team before I entered the NBA," he said. "You need to train hard with the team. It does not matter whether you are selected or not, training is the only thing that matters."

Sixty-one players participated in this year's draft and 24 of them played in the college league, both new records. In the end, 16 were selected and seven of them, a new high, were college players. No grassroots player was selected.