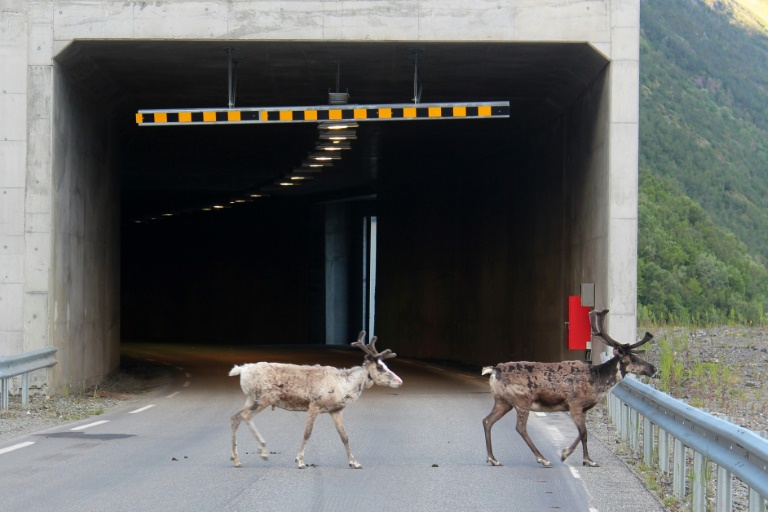 The Norwegian Public Roads Administration said no serious accidents involving animals have been reported yet but described the situation as "a challenge". (Photo: AFP)

Norwegian authorities have urged motorists to watch out for reindeer that are seeking refuge in tunnels to cool themselves amid extreme heat in the nation's far north.

"It has been very hot for weeks in northern Norway," Tore Lysberg, a senior official at the Norwegian Public Roads Administration, told AFP on Thursday.

"The animals retreat to colder places, both reindeer and sheep find refuge in tunnels and shaded areas to cool down," he said.

Although this phenomenon is nothing new, it could be intensified by record temperatures in Norway's northernmost regions.

The Norwegian Meteorological Institute posted a temperature of 31.2 degrees Celsius (above 88 Fahrenheit) on Wednesday in Finnmark, a major reindeer herding region located within the Arctic Circle.

The region is so hot that it has experienced 12 "tropical" nights with evening temperatures above 20 degrees Celsius so far this year, according to the Norwegian Meteorological Institute.

The Norwegian Public Roads Administration said no serious accidents involving animals have been reported yet but described the situation as "a challenge".

The government agency, which has multiplied its messages to raise awareness among motorists, should be helped by the weather, which is expected to return towards normal starting this weekend.