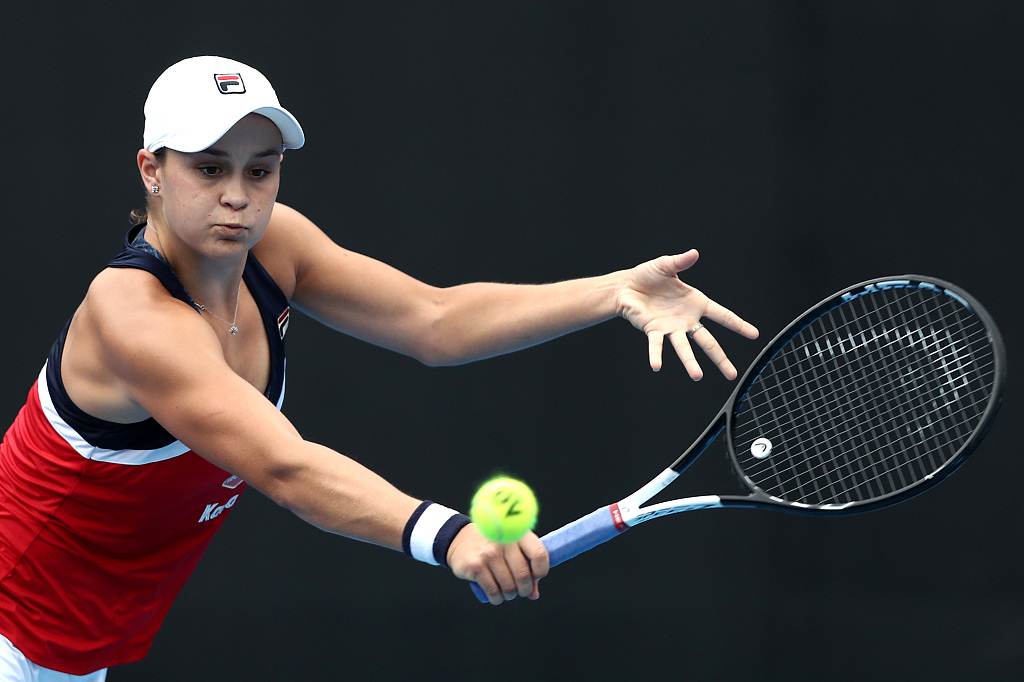 Ashleigh Barty of Australia plays a shot in her semi final match against Kiki Bertens of the Netherlands during day six of the 2019 Sydney International at Sydney Olympic Park Tennis Centre on January 11, 2019 in Sydney, Australia. (Photos: VCG)

The 22-year-old Barty is on a hot run, stretching her unbeaten streak to seven matches dating back to her career's biggest title at the WTA Elite Trophy in Zhuhai.

She is one of the form players heading into the Australian Open next week, but had to to dig deep to scramble past world number nine and seventh seed Kiki Bertens (6-7 (4/7), 6-4, 7-5).

Her reward is a clash with either 2015 champion Petra Kvitova or Belarusian qualifier Aliaksandra Sasnovich, who play later.

"It's amazing. It really has been a phenomenal week of tennis," said the 15th ranked Barty, who also made the final last year.

"I feel like I've played great all week and have had tough opponents every single round and I'm really excited to have another shot at the title."

She came into the match with the advantage of having twice beaten Dutch star Bertens previously, including as recently as last August in Montreal.

World number eight Kvitova will face Sasnovich later Friday in the other semi-final, the same woman who knocked her out of Wimbledon in the opening round last year.

The Belarusian might be a qualifier in Sydney but has previously reached two WTA finals, including in Brisbane last year, and has five top 10 career wins.

Seppi edged past Schwartzman 7-6 (7/3), 6-4, a day after derailing the hopes of top seed Stefanos Tsitsipas, proving he still has what it takes at age 34.

The Italian, seeded eight, had made three previous semi-finals in Sydney -- the first way back in 2006. But he had never gone further and was delighted to get a crack at another ATP title to add to three he already owns.

"It was never easy, he is a great fighter and makes you play a lot of balls and you have to run a lot," said Seppi of the Argentinian. "But I played a good match today and was happy to close it out.

"I'm trying to keep working hard and I always play well in Australia. My last final was in 2015, so excited to be on another one," he added.

Australia has been a happy hunting ground for Seppi.

As well as his deep runs in Sydney, he has a trio of round-of-16 appearances at the Australian Open, when he pulled off upsets against Marin Cilic in 2013, Roger Federer in 2015 and Nick Kyrgios in 2017

He will play either exciting young Australian Alex de Minaur or veteran French star Gilles Simon in the final.