CULTURE Relics returned from overseas on display in National Museum

Relics returned from overseas on display in National Museum

As 1.4 billion people prepare to celebrate the 70th anniversary of the founding of New China, long-lost relics are on display to help honor the country's ongoing revitalization. 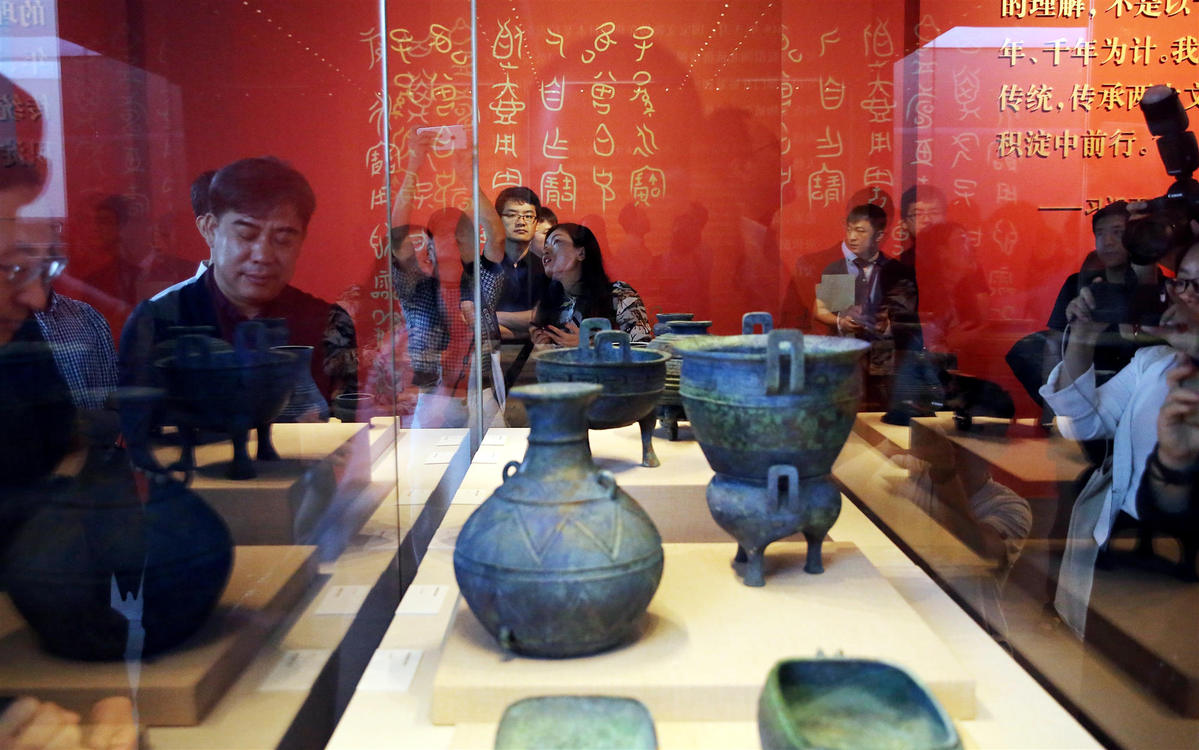 Visitors look at bronze vessels repatriated from Japan during an exhibition featuring relics returned from overseas at the National Museum of China in Beijing on Tuesday. (Photo: China Daily)

A major exhibition opened on Tuesday at Beijing's National Museum of China to highlight the wide range of Chinese cultural relics that have been returned from overseas since 1949.

The 600-odd objects range from treasures from the imperial collection of the Qing Dynasty (1644-1911) plundered from Beijing by invading Anglo-French Forces in 1860 and the Eight-Nation Alliance Forces in 1900, to relics stolen and smuggled from tombs over the years.

They are on loan from 18 museums and institutions nationwide and cover a wide time span.

Many familiar artifacts are on display, including Chinese zodiac animal-head sculptures looted in 1860 from a fountain in the royal resort Yuanmingyuan in Beijing; Shang Dynasty (c.16th century-11th century BC) bronze ware Min fanglei, a large wine container smuggled overseas in the 1920s shortly after being unearthed in Hunan province; and Tang Dynasty (618-907) Buddha images taken from Longmen Grottoes in Henan province in the 1930s.

"When our country was inflicted with social havoc, many precious treasures were taken overseas," said Wang Chunfa, director of the National Museum of China. "This exhibition not only helps people better understand abundant historical information related to these artifacts, but also how they were returned home."

Collections from the National Museum of China contributed about two-thirds of the relics on display.

Much effort has been taken to repatriate lost cultural relics since the earliest years of New China. According to the National Cultural Heritage Administration, more than 150,000 Chinese relics have been returned in 300 separate cases since 1949.

The most recent repatriation occurred in August when eight Spring and Autumn Period (770-476 BC) bronze objects were returned from Japan.

According to Guan Qiang, deputy director of the cultural heritage administration, cross-border judicial and law-enforcement cooperation have played key roles in the repatriation. For example, in 1998, more than 3,000 smuggled Chinese cultural relics were returned by British police. It is to date the largest collection of lost cultural relics repatriated to China in one shipment.

In 2001, one half of a pair of stone statues stolen from a Tang Dynasty general's tomb in Hebei province was returned to China following a verdict by a New York court. Upon hearing the news, a United States collector soon donated the other half to China.

Guan said the case set an example for Sino-US cooperation in the fight against cultural relic-related crimes. This led to 22 pieces being returned from the US in 2015 and about 360 artifacts making their journeys home in February. In a similar manner, 796 items lost to Italy arrived in Beijing in March.

One of the aforementioned Buddha images from Longmen was donated back to China by the National Gallery of Canada in 2001. British authorities approved the return of a bronze bell to Tianjin in 2005. The bell was taken from a military fortress in 1900 and displayed in a park in Portsmouth for over a century.

Such repatriation cases have become more frequent in recent years and they are important references for similar cases in other countries. But Guan said that future work in this area will be "no easier".

"For each case, we have to make a tailored plan because the reasons the items got lost differ and may involve complex historical issues," he said.

A 1970s-era UNESCO convention preventing the illicit import and export of cultural property is currently a legal guideline for returning relics to rightful owners, but Guan said the convention is more of an international commitment than compulsory law.

As a complement, China has signed intergovernmental agreements with 22 countries, including the US, Italy and Switzerland.

The exhibition will run through late November, but some exhibits-like paper-based artwork-will only be displayed for a month due to the relative fragility of the items.