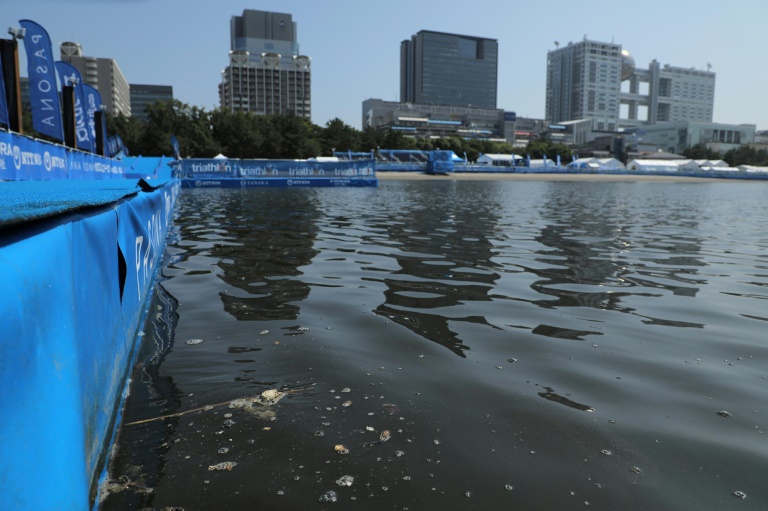 The swimming section of a paratriathlon test event for Tokyo 2020 was cancelled on Saturday due to high levels of bacteria in the water. (Photo: AFP)

France won a thrilling mixed triathlon test event for the Tokyo 2020 Olympics Sunday, which passed off as planned in a welcome boost for organisers after difficulties with high temperatures and water pollution.

The swimming leg of the paratriathlon on Saturday was scrapped after water tests showed levels of e-coli bacteria more than double the acceptable standard and the running section of a women's test event on Thursday was curtailed in blistering temperatures, with French athlete Cassandre Beaugrand treated for heatstroke.

But on Sunday in the Japanese capital with the temperature a slightly cooler 30 Celsius, the levels of bacteria reduced to within permitted levels.

The mixed relay, a new event for Tokyo 2020 involving two men and two women, was won by France in a photo finish from Great Britain after a nail-biting final sprint.

Dorian Connix chased down Alex Yee on the final straight despite being behind for most of the race and breasted the tape fractionally ahead of his British competitor. A powerful United States team came third.

The format is much shorter than the individual race with each athlete completing a 300 metre swim, a 7.4 kilometre cycle and a 2km run before handing off to a teammate, making it less demanding in hot weather.

"I don't think conditions were as bad as Thursday when we raced," South Africa's Gillian Sanders told AFP.

"I don't think it's too hot not to race or too hot to reduce the distance," added Sanders, who said that the water quality also felt better.

"Personally, I don't think I've acclimatised properly because I haven't been here for long. I've been here five days and I think you need two or three weeks. So it's a really good learning curve," said the 37-year-old.

Battling the heat of the sweltering summer has become the main challenge for Tokyo 2020 organisers, who have otherwise won widespread praise, including from the International Olympic Committee, for their preparations.

Yasuo Mori, deputy executive director of the Tokyo 2020 Games Operations Bureau, said athletes needed to have greater access to water during the race.

"That alone would lower the risk of athletes getting heatstroke. That may be one of the realistic measures," he told reporters.

The International Triathlon Union would examine increasing the number of water supply points and was deploying medical staff every 500 metres along the course in case of an emergency, Mori added.

Aside from the problems at the triathlon, about a dozen people, including a spectator, were taken ill at a rowing test event last week with suspected heatstroke.

A construction worker also died on an Olympic site as Tokyo sweats through a prolonged and deadly heatwave.

The triathlon test events have courted controversy even without the heat -- two British athletes were disqualified on Thursday for crossing the line first holding hands.

Jess Learmonth and Georgia Taylor-Brown fell foul of ITU rules stating that "athletes who finish in a contrived tie situation, where no effort to separate their finish times has been made, will be disqualified".