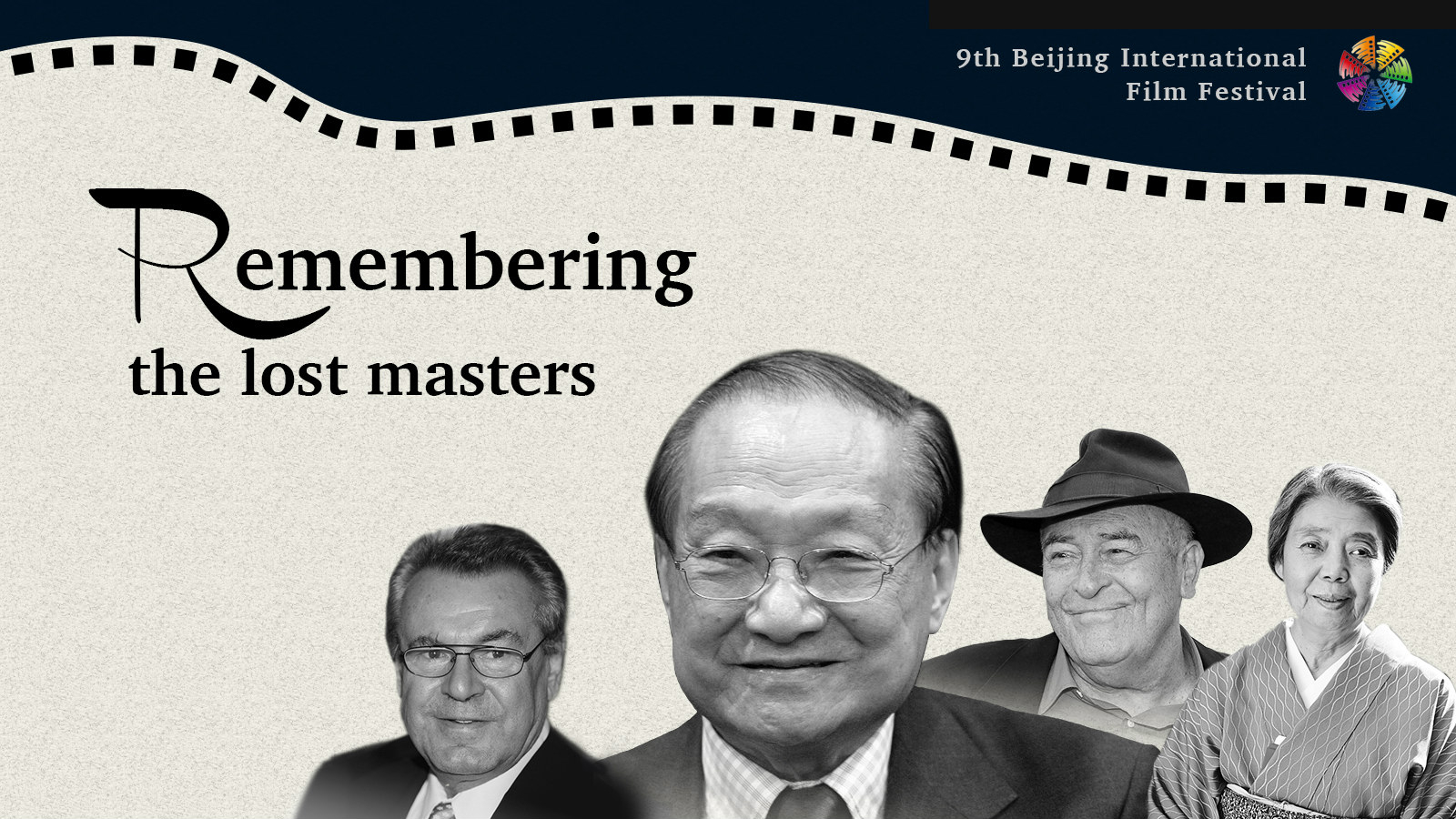 The ninth Beijing International Film Festival (BJIFF) is just around the corner.

Expected to open on April 13 this year, the event is always considered an important annual fixture by Chinese film enthusiasts.

It is the season to savor good memories through the classic films that make up a significant portion of the festival. It is also a time to remember the lost masters who left legacies in the industry.

In 2018, the global film circle lost a number of great artists, and the 2019 BJIFF has a special section screening their films to show respect and pay tribute.

Veteran Japanese actress Kirin Kiki died at the age of 75 at her home in Tokyo on September 15, 2018, only four months after "Shoplifters" won the coveted Palm d'Or in Cannes, in which she plays the granny of the makeshift family.

In the film, Kiki was house owner Hatsue, who supported the group with her late husband's pension. In a scene during the family's last outing together at the sea, the elderly woman, knowing that her life is approaching an end, silently said "thank you" to the younger members of the "family". Kiki's natural and sensitive acting melted millions of hearts.

Her acting was full of life and always touching audiences with its implicit Eastern philosophy and aesthetics.

Kiki created many classic performances on the big screen, such as in "Tokyo Tower: Mom and Me", "Sometimes Dad" – which helped Kiki to win the Japanese Academy Prize best actress in 2011 – and "After the Storm".

During the 2019 BJIFF, Kiki's film "Every Day a Good Day" will return to cinemas, giving audiences in China a new chance to spend time with the loved Japanese actress.

Chinese moviegoers are intimately familiar with Italian director Bernardo Bertolucci. Back in 1987 he directed "The Last Emperor", a biopic depicting the life of China's last emperor Puyi of the Qing Dynasty (1636-1912), in Beijing.

Not only was it shot on location, it is also the only film actually shot in the Forbidden City.

"It was the first time, and also the last time, I could hear my own footsteps in the Forbidden City without any visitors," Chinese actress Chen Chong, who played Puyi's wife, the last empress Wanrong, said while recalling the film shoot.

Chen Chong expressed her deep mourning when Bertolucci passed away on November 26, 2018.

"In my memory, producing 'The Last Emperor' was like an eight-month wedding; grand and boisterous. And I had been a bride for the eight months. Every day, I waited for Bertolucci to lift my veil and fall in love with me…" she wrote.

In 2018, Bertolucci was invited to be part of the grand jury for the BJIFF but wrote a letter to express his regret at being unable to take part.

In it, he said he felt sorry for not being able to return to the futuristic skyscrapers sparkling in the evening, and eat his favorite dumplings.

"I'll be back to China one day, as I am appealed by the nostalgia and curiosity," said Bertolucci in the letter – but he never made the journey.

Bertolucci directed a number of classic films besides "The Last Emperor", and this year, the ninth BJIFF put his film "The Sheltering Sky" back on big screens, which the organizer say will bring the "poetic feelings, mysterious music, fantastic filming and the epic narration" to the audience.

Milos Forman, a prominent figure in the Czech New Wave, was another big loss of the past year.

Two of Forman's most well known films are "One Flew Over the Cuckoo's Nest" and "Amadeus", for which he won the Academy Award for Best Director. The former, a 1975 comedy-drama film adapted from Ken Kesey's novel, is also the second film ever to win all five major Oscars, including the Best Picture, Actor and Actress in Leading Role, director and screenplay.

Forman has almost swept all awards of the international film festivals during his career, including the Oscars, Golden Globes, Cannes, Berlinale, BAFTAs and the Cesars.

This year, at the 2019 BJIFF, a director's cut of "Amadeus" is to hit the big screens. It is a fictionalized biopic of Wolfgang Amadeus Mozart, and is considered one of the best films ever made.

In it, the director brings the musical genius to the screen over the course of three hours. It was originally released in 1984, and had claimed some 40 awards from the world's most renowned film festivals.

In 2018, China lost a great master who, while not an insider in cinema, inspired dozens of films and television series with his novels.

Louis Cha Leung-yung, more widely known by his pen name Jin Yong, died at the age of 94 on October 30, 2018, sending a huge tides of mourning across China. His most famous novels are a special Chinese genre known as Wuxia, which depicts a group of chivalry people called "Da Xia" who master various types of kungfu, and are usually righteous and courageous enough to shoulder social responsibilities.

Several films adapted from Jin Yong's novels, such as "Swordsman", "The Eagle Shooting Heroes", and "Ashes of Time", which have been included in the Beijing Film Panorama section, so that Jin Yong's readers and fans of the films that bear his name can spend hours savoring the worlds he created.

Memories might fade as time goes by, but the images and stories recorded on the big screens will last forever. Whenever the lights go out and the screens light up, the films bring these old masters back for just a little while.