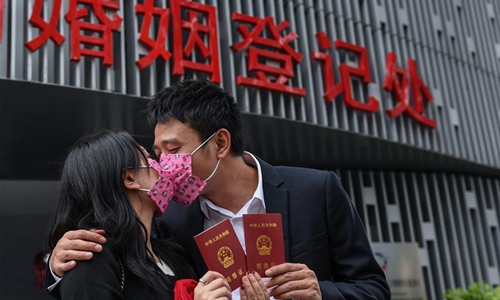 A marriage report released by the Shanghai government on Wednesday showed a marriage and a divorce boom in 1981 and 2016,  respectively, which experts noted were caused mainly by government policies.

The marriage report was released on Wednesday by Shanghai Civil Affairs Bureau to mark the 70th anniversary of the Marriage Law, the first law that the People's Republic of China enacted in 1950.

It shows statistics of Shanghai's 70 years of marriage and divorce rates from 1950 to 2019. During the past seven decades, over 7.6 million couples have registered marriage in Shanghai.

In March 2016, the Shanghai government issued a series of policies to regulate the then overheated housing market, which included increasing the down payment of families' second house from 40 percent to up to 70 percent.

As a result, many couples chose a "fake divorce" that year to skip the policy, Liu said.

"They registered for divorce, bought their second house in the name of either one as a single person, and then remarried," Liu told the Global Times. "In that way, this house would be identified as a 'first house,' enjoying preferential down payment and loan."

Similar to the 2016 divorce boom, Shanghai's marriage boom in 1981 was mainly the result of then government policy as well, observers said.

Some 290,700 couples in Shanghai registered marriage in 1981, driving the marriage rate to an unprecedented high of 25.18 per thousand, according to the report.

The boom might be created by the returning of zhiqing (educated young people who were sent by the government to work in remote rural communities in the 1960s and 70s), Liu analyzed.

Shanghai zhiqing began returning home since the late 1970s. The number of zhiqing returnees peaked in 1980 when 287,500 people moved to Shanghai that year - the most significant amount over the past decades, Liu said, citing data from local statistical yearbooks.

Therefore, it was not surprising that many returned zhiqing got married in the following year, Liu added.

Except for the two booms above, the city's marriage and divorce rates have remained generally stable during the past decades,  Zhou Fei, official of Shanghai Civil Affairs Bureau, told the Global Times Thursday.