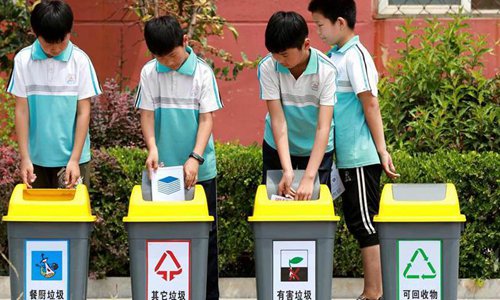 China is attempting to engineer a huge shift in how businesses and individuals deal with garbage, as Shanghai becomes the first city to enforce new trash sorting rules that come into full effect on July 1.

Passed in the second session of the 15th Shanghai Municipality People's Congress at the end of January, the rules say that residents must sort their garbage into four classifications - household food or kitchen waste, hazardous waste, recyclable waste and residual waste. Individuals who fail to sort their trash may be liable for a fine of up to 200 yuan ($291), while firms and organizations can be fined up to 50,000 yuan.

The new regulation applies to tourists and visitors to the city, from home and abroad.

According to the Xinhua News Agency, Shanghai has installed more than 13,000 waste stations, so far covering 75 percent of the city, and has replaced more than 40,000 streetside trash cans for different types of waste, which have more obvious and easy-to-understand signs.

The municipality is taking the lead in introducing a waste sorting system that will be gradually rolled out over the whole country. Following Shanghai, another 45 cities in the Chinese mainland will introduce similar regulations, including Beijing, Shenzhen and Guangzhou. By the end of 2020, the 46 cities will invest 21.3 billion yuan to build waste sorting and recycling systems, Xinhua said.

Local residents in Shanghai told the Global Times that some communities had taken part in pilot trash-sorting projects ahead of the citywide rollout.

Geng Dechao, a retiree, has been helping with trash cleanups since 2011. He said that his community was chosen to pilot the new rules last August, which involved taking garbage to the community waste station at certain times and sorting it into the appropriate bin.

"At the beginning, some of residents were reluctant and couldn't sort [the trash] properly, but now most of our residents can do it well and those who were reluctant are doing really well after we guided them," Geng told the Global Times on Saturday.

As July approached, Shanghai residents have shown a sense of humor about the new practices as they tried to learn what to do.

"The most popular place within our residential community is not the gym but the place near the trash bins," one net user joked.

Some people suggested that sales were so good that people were limited in how many they could buy.

Shanghai Municipal Education Commission has decided to include garbage sorting knowledge in the city's junior high school tests, according to reports on Friday.