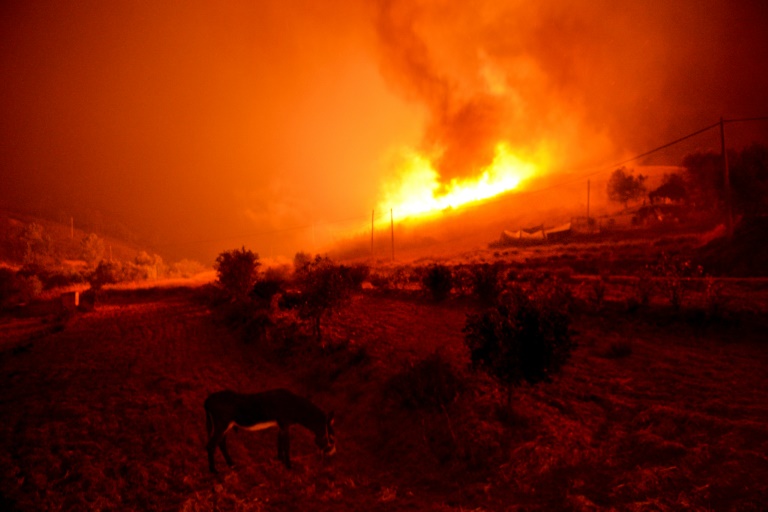 Firecrews used aeroplanes and helicopters, as well as vehicles on the ground to bring the flames under control in Monchique, pictured during another wildfire in 2016 (Photo: AFP)

A village in a tourist area in southern Portugal was evacuated Friday as more than 400 firefighters tackled a forest fire, emergency services said.

With Europe still on high alert during a record-breaking and deadly heatwave, Portugal has seen the mercury reach almost 46 degrees Celcius -- with more hot days to come.

Firecrews used aeroplanes and helicopters as well as 121 vehicles on the ground to bring the flames under control on heathland in the tourist zone of Monchique, according to a report on the National Authority of Civil Protection website.

Residents of a small village were "moved as a precaution... to avoid panic", the Faro relief command told local media.

The fire was progressing on two fronts in a difficult-to-access area, fanned by the wind, he said, adding that the firefighters' work was "going well".

The fire took hold around the Monchique mountain range at the highest point of the Algarve, a tourist region in the south of the country.

More than 1,000 firefighters and 15 aircraft were called into action across Portugal on Friday as forest fires raged, civil protection services said.

Portugal has been on high alert since Wednesday and authorities have brought in various measures in a bid to avoid a repetition of fires that killed at least 114 people last year.

The country's top temperature was recorded on Thursday, when Mora in the south reached 45.7 degrees Celcius, according to the Portuguese Institute of the Sea and Atmosphere (IPMA).