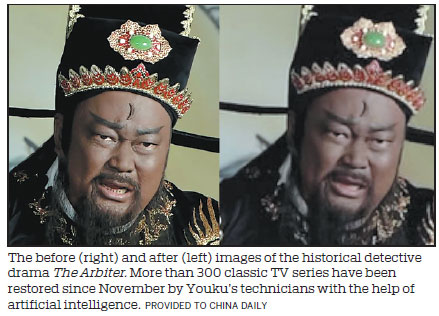 Generations of Chinese people growing up between the 1980s and the early 2000s will no doubt share fond collective memories of spending the long afternoons of their childhood summer vacations squeezed in front of small TV sets watching their favorite shows.

Most people will be able to reel off the names of these productions, which have been broadcast over and over again: the historical detective drama The Arbiter, the martial arts saga Legend of the Dragonslayer Sword, the fantasy New Legend of Madame White Snake. You name it, we've all seen them.

Nevertheless, for the content managers at Youku, one of China's leading video streaming platforms, one problem has been bothering them for a long time.

When they finally gained the broadcasting rights for these old drama series - in a bid to tap into people's nostalgia - they were embarrassed to find users soon abandoning the series. Some viewers even stopped watching after less than a minute, their big data analysis showed.

"These old TV series are such classics, that the storylines and the acting were not the problem," says Pei Yinxiang, an IT engineer from Youku. "There was something wrong with the quality of the images."

While vintage roles and stories may be able to survive the test of time, the pictures cannot. When the blurred images and dark colors flicker onto the screens of modern digital devices, which are set up for high-definition viewing, the viewers' lukewarm response was easy to predict.

"The original tapes were often scratched or tarnished by mildew after being stored for such a long time," Pei explains. "You can imagine what they will look like on online streaming media."

While the restoration of old films is commonplace in the movie industry, this kind of work on TV series is rare in China, largely because of the length of time it takes.

Restoring a feature-length film by hand can easily take months, if not up to half a year. Hong Kong film director Peter Ho-sun Chan once said the image restoration of his most acclaimed work Comrades: Almost a Love Story cost 1.5 million yuan ($224,000), excluding the expenses for restoring the soundtrack.

Faced with hundreds old TV series to restore, Youku was naturally reluctant to throw such a huge sum of money at every project. Their technicians then turned to artificial intelligence to develop programs that could automatically enhance the tapes.

"If a lengthy manual frame-by-frame restoration might be able to achieve a full score of 10, at least we could turn an 'unwatchable' series into one that achieves a score of 7 to 8 points within a shorter period of time using mass digital techniques," says Jiang Wenfei, a leading technician and head of Youku's 30-member restoration team.

He estimates that a single episode takes one working day to restore using traditional methods.

Pei explains that correcting the color cast is the most common problem they have to fix. "People's faces sometimes look like they are covered by dirt (on film), and their black hair turns green or blue."

AI algorithms also give the images a much higher definition.

Nevertheless, while the team once thought that AI offered all the solutions, a new question soon arose. Audience members asked: "Where's the original flavor?"

After restoring the images to their original state, they soon began to realize that people still needed some nostalgia. For example, old series made by Hong Kong-based company TVB usually have yellowing images, but many viewers complained that its retro ambience had vanished after the color cast was corrected, Jiang says.

"People then said our restored version looked like a camera filter has been added," Pei says with a bitter smile. "We then had to go back and adapt our methods."

More complicated algorithms were later developed to carry out a tailored plan for each type of series, including those by TVB, Chinese mainland productions from the 1980s and Taiwan productions of the 1990s. Some techniques in hands-on restorations were introduced later too, as Pei confesses even the best AI cannot handle every case.

"People's tastes are more highly developed," Jiang says. "We just want to give people the same feeling watching them on digital devices today as they had on small TV screens years ago."

More than 300 TV series have been restored since November, and Pei says all their data has gradually helped to build up a database, which will further improve the algorithms.

In March, the restored edition of 2003's Legend of the Dragonslayer Sword was released online through Youku. Unexpectedly, it soon climbed into the top 10 list of most-viewed drama series on the platform, with all the others being new productions.

Jiang points out that many adaptations of old classics are now being made following the rise of online streaming media platforms.

"But they are often heavily criticized," he says. "I don't know whether it is because the performances are so poor. However, if we can make the original productions look just like new ones through restoration, people can at least have more choice."

The 1980s classic The Bund produced by TVB, a story set in Shanghai in the 1930s starring Chow Yunfat, has so far been the most time-consuming restoration work, but Jiang says it's worth it.

"George Lucas spent many years restoring old Star Wars films he made himself," Jiang says. "It's almost like a remake. We're also looking to create a classic Chinese production, which needs just as much of our energy."

Speaking of the future, Pei says there is no end to their work. "People get used to watching TV productions shot in 4K resolution today. However, once 8K becomes common, viewers might consider 4K shows 'unwatchable' again. Today's work will still need restoration one day."