Wu Yuren, a 72-year-old retired professor of physics from China's top-level Tongji University, has recently become an online sensation on the country's short video-sharing platforms for her efforts towards the popularization of science.

Wu has already been engaged in science popularization for 16 years. After her retirement, she started to make use of short-form video platforms to popularize physics knowledge and demonstrate interesting physics experiments.

"The construction and development of the country cannot be achieved without improving the quality of the whole population, with more in-depth studies and the promotion of beneficial science popularization being needed,” said Wu, while recalling her original intention for getting engaged in science popularization.

In her videos, Wu’s most commonly worn outfit is her khaki-colored multifunctional vest, which features more than a dozen pockets all over. Like Doraemon's pocket, her pockets are full of magical "toys", such as mineral water bottles, plastic scarves, glasses, etc.

"Today, I'd like to introduce you to the 500-meter Aperture Spherical Telescope, or FAST for short, which is our eye in the sky." Speaking into the camera, Wu suddenly held up an iron pot in a video clip, "FAST is like a big pot. How big is it? If this pot is filled with liquor, each person in the world could share 4 bottles..." 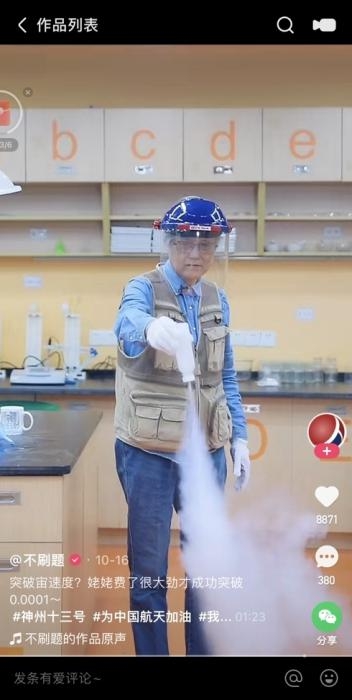 Wu performs a simulation experiment on the topic of China's launching of its Shenzhou 13 spacecraft. (Photo/chinanews.com.cn)

What do cosmic rays in space look like? Wu raised a bamboo broom with her right hand in another video clip, and her left hand swept the broom from the handle to the end. In this way, audiences would immediately understand that the trajectory of cosmic rays is like a broom – that is, the concentrated energy gradually becomes weakened and scattered.

Wu also took great delight in interacting with cyber citizens. For instance, when some asked Wu a question about just what exactly the Faraday cage is, Wu brought in a strainer from her home and transformed it into a conductive device. Then, she pasted small strips of paper on the inside and outside of the strainer. After she switched on electric current, the strips outside began to move around while those inside remained steady. In this way, the electrostatic shielding effect of the Faraday cage was easily displayed.

However, science popularization is never an easy task. Translating complex physics principles and difficult physics terminology into easy-to-understand language without distorting them requires both a deep knowledge of physics and a strong ability to express and demonstrate the principles with experiments. It is even more difficult to teach science to children, as it requires consideration of the language acquisition and acceptance abilities of children of various ages. 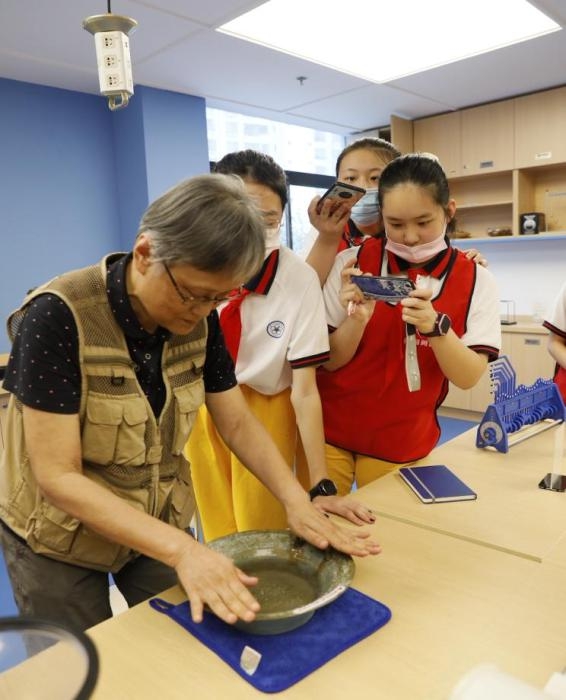 To help solve these problems, Wu and her team resorted to the medium of short-form videos. Gradually, the team found that in those videos where Wu appeared on camera, the number of video clicks was particularly high, with the former professor always able to make use of everyday items to explain complex phenomena found in the field of physics.

When a netizen left a comment saying, "If my teacher taught me physics this way when I was a kid, I might be a scientist." Wu replied jokingly, "it's not too late."

Wu's vision is to "build a dream for the future through science." As long as more and more people can realize the charm of physics and enjoy endless fun from the world of science, she feels that all of her efforts are worthwhile.