CULTURE Return from Wuhan with care

Return from Wuhan with care 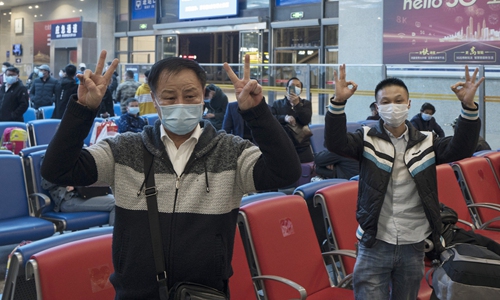 After the end of a 76-day lockdown, people stranded in Wuhan are heading to cities across the country where they usually work and live, but despite their cheer, returnees reached by the Global Times noted some confusion in policies that made their journeys less than smooth.

On Wednesday as the travel ban ended, some 55,000 people left the city on trains and more than 7,100 departed by air. Some 20 percent of them headed for places outside Hubei Province, with South China's Guangdong Province, neighboring Henan Province and East China's Anhui, Jiangsu and Zhejiang provinces as popular destinations, media reported.

Amid concerns over silent carriers, different cities have different policies to receive Wuhan returnees while making sure the COVID-19 virus will not be resurrected.

"I was lucky because I did the free nucleic acid test beforehand and could finally board the train back to Beijing on time," Cai Mengyi, told the Global Times as she rode on Thursday's G4802 bullet train back to the capital city.

Only with a negative test result, a green health code and registration on the Jingxinxiangzhu app with Beijing authorities can a person board a train back, Cai said, noting she saw people being stopped at the check-in area of Wuhan North Station for failing to provide a test result.

Beijing authorities on Wednesday announced that Wuhan people coming to Beijing should take nucleic acid tests twice - one within seven days before departure, one before they finish a 14-day quarantine after arriving in Beijing. The influx will be controlled at about 1,000 people a day.

Cai's community in Chaoyang district in Beijing will pick her up at the train station and she is allowed to follow a home quarantine after communication with her landlord and a "considerate roommate" who is also a Hubei native.

Cai did the test on Sunday, and now "people are rushing to test and queuing up to buy tickets via the Jingxinxiangzhu app due to the 1,000-person quota. And if one's roommate does not agree, the returnee will have to undertake a  central quarantine at his or her own expenses," Cai said.

Shanghai overall does not require returning green code holders to take the nucleic acid test or undergo a quarantine, but the city's Minhang district government said on its official Weibo account that policies may vary at different communities, which have their own rules based on specific situations.

Companies may also require employees to take the test and undergo a quarantine period before resumption of work, the government said.

The Global Times saw on China's Twitter-like Sina Weibo that some Shanghai residents urged the municipal government to require nucleic acid tests for all returnees as they could be silent carriers and spread the coronavirus to others.

Yang Zhanqiu, a Wuhan-based virologist, noted that asking returnees to take the test is a safer method, although it was a bit "wasteful" as only a very few green code holders could be asymptomatic carriers. If receiving governments and employers want 100-percent guarantees, they should cover the test costs, Yang told the Global Times.

According to the previous policy, people in Hubei who were not infected or in close contact with COVID-19 patients could be granted a green health code without a nucleic acid test. Recovered patients could have their codes changed from red to green after negative tests.

People who have been stranded in Wuhan have formed online chat groups to share information about procedures to leave Wuhan and different policies of receiving cities.

According to an anonymous Wuhan returnee to Hangzhou, capital of Zhejiang Province, in one such chat group, they were sent to a quarantine hotel after disembarking from the plane. Zhejiang required people from Wuhan to offer a negative nucleic acid report before returning home or to work, but the returnee was not informed of when they could take the test or how long they needed to wait for results.

The hotel is at least a four-star facility and each community has designated hotels, the returnee said after sharing a few photos in the chat group. "Glad the accommodation and the test are free, but I am annoyed at not being told how long I need to stay here," the returnee said.

A member of the chat group surnamed Mu told the Global Times that discrimination against Wuhan returnees exists. Mu has been working temporarily as a van driver and took a group of people to another province on Wednesday. At a restaurant in a highway service station outside Hubei, the waiter pestered them to leave after learning that they were from Wuhan. The group finally left without finishing their meal.