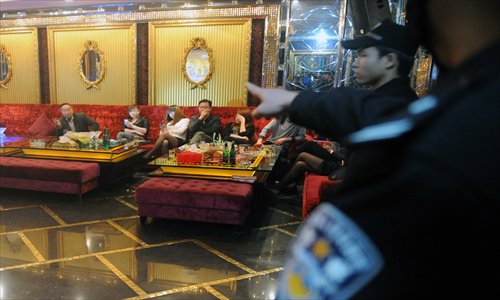 Police officers inspect a night club in Dali county in Fuoshan, Guangdong Province. The Fuoshan police launched a citywide campaign to crack down on drug use and other illegal activities in 2012. (Photo: CFP)

A high-level private club in Shanghai has been forced to close after one of its male hosts allegedly received 28 luxury gifts for his 28th birthday, including an Audi and 280,000 yuan ($41,513) in cash.  The male host has been called "the most expensive host ever" on Chinese social media after posts and pictures of his luxurious birthday went viral on Friday. Local police on Sunday told the Global Times that they would be releasing a public announcement on the case but  refused to say the exact time."The club closed on Saturday after local police came," an employee in the rental department of Wangwang building, where the club is housed, told the Global Times on Sunday. The club has not terminated the rental contract, she said. The private club solely for women called Perfect Space, located in the downtown area, is equipped with 19 VIP boxes in 1,600 square meters, according to its website. All the employees in the club were men who provided service to rich women whose assets were "over 20 million yuan," media reported. A Sina Weibo user named "Yaomaokuangmo" posted details of the luxury birthday party to social media on Friday which soon generated the trending hashtag "Is all rich women's love so lavish?" The club was reported to have posted a recruitment notice on its Sina Weibo account, writing that "Handsome and fashionable men wanted for host service for women… No illegal service… Tips from 1,000 yuan." However, the Global Times reporter on Sunday found all posts after 2014 had been deleted from the club's Weibo account.