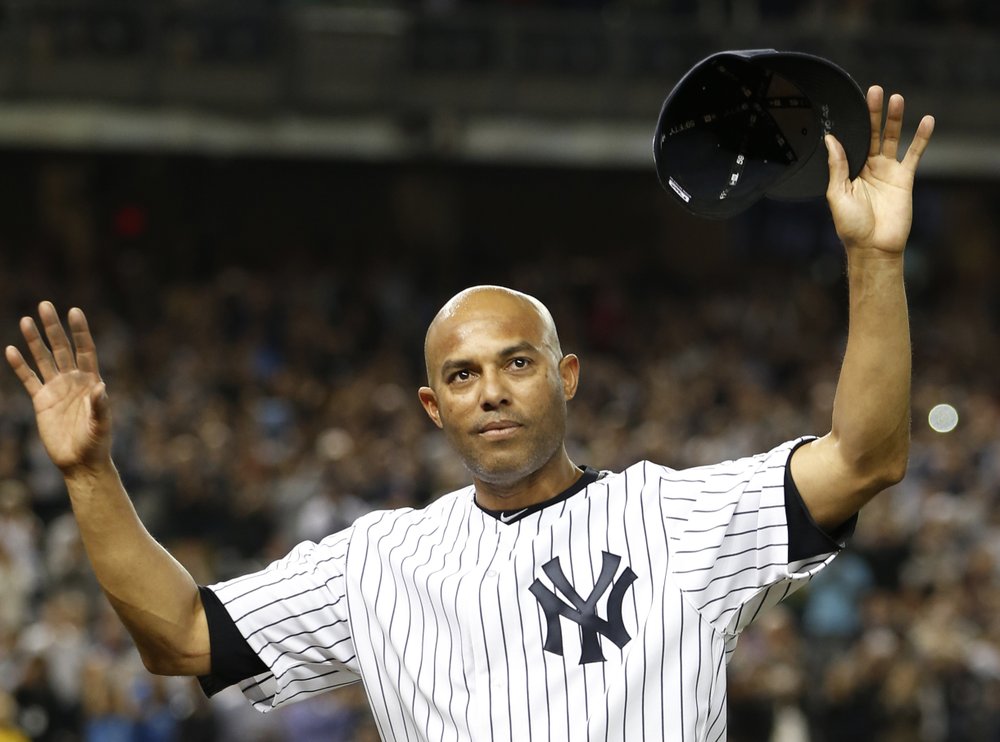 In this Sept. 26, 2013, file photo, New York Yankees relief pitcher Mariano Rivera acknowledges the crowd's standing ovation after coming off the mound in the ninth inning of his final appearance in a baseball game, at Yankee Stadium in New York. (Photo: AP)

Mariano Rivera figures to make quick work of his Hall of Fame ballot appearance, just as he did of opposing batters, and could even set another record when voting is announced Tuesday: for highest percentage of ballots.

No one has ever been a unanimous Hall of Fame selection. Ken Griffey Jr. holds the mark for the top percentage at 99.32 when he was on 437 of 440 ballots two years ago.

Rivera was picked by all 221 voters totaled through midday Tuesday afternoon by Ryan Thibodaux’s Hall of Fame vote tracker, about half the expected ballots.

Bill Ballou of The Telegram & Gazette in Worcester, Massachusetts, wrote in November that because he didn’t plan to vote for Rivera, he wouldn’t submit a ballot.

“He has had a long career, albeit in a role I do not value, a role I equate with a PAT kicker in football or a shootout guy in hockey,” Ballou wrote. “Rivera could be the first Hall of Famer elected unanimously. I think I’m right about closers, but not so much that I would deny Rivera a chance to be the first unanimous Hall of Famer.”

But in a column Tuesday, Ballou said he changed his mind and selected the reliever.

“Perhaps the best way to decide on now to vote in Hall of Fame elections is gut instinct. It is Potter Stewart and pornography — ‘I know it when I see it,’” he wrote, referring to an opinion by the former Supreme Court justice.

Roy Halladay also appeared headed to election in his first appearance on the Baseball Writers’ Association of America ballot, while Edgar Martinez seemed likely to join them in his 10th and final appearance. Mike Mussina also could gain the honor, but Barry Bonds, Roger Clemens and Curt Schilling probably will fall short while getting closer.

Rivera set the career saves record with 652 in 19 seasons plus 42 more in the postseason. The New York Yankees didn’t even wait until his final game to retire his No. 42 — he was the last player in the major leagues to wear that number, grandfathered when No, 42 was retired in honor of Jackie Robinson in 1997.

Rivera’s efficiency was renowned on a Yankees’ dynasty that he helped win five World Series titles: He retired the side in order in 229 of his 491 three-out saves. according to the Elias Sports Bureau. He broke the previous mark of 601 saves, set by 2018 inductee Trevor Hoffman.

Rivera made a weepy exit in September 2013, when teammates Derek Jeter and Andy Pettitte went to the mound to remove him against Tampa Bay in what turned out to be his finale. After the final out, Rivera went back to the mound where he became famous and gathered a bit of his workplace to take home.

“I wanted to get some dirt, just stay there for the last time, knowing that I ain’t going to be there no more,” he said.

Halladay’s election will be tinged with melancholy. The two-time Cy Young Award winner died in November 2017 at age 40 when the airplane he was piloting crashed into the Gulf of Mexico off the coast of Florida. He went 203-104 with a 3.38 ERA in 12 seasons with Toronto and four for Philadelphia.

In 2010, he pitched a perfect game against the Marlins in May, then threw a no-hitter against Cincinnati in the NL Division Series opener — only the second no-hitter in postseason history after Don Larsen’s perfect game for the Yankees against Brooklyn in the 1956 World Series.

Halladay retired at age 36 because of back injuries.

“I want to continue to do things I enjoy doing, spend time with my family,” he said when making the announcement. “The biggest thing is I’m trying to avoid surgery.”

Halladay was tracking at 92.9 percent, an overwhelming choice.

“We are trending up, next year may be the year,” he tweeted after the 2018 vote.

Martinez hit .312 with 309 home runs in 18 seasons with Seattle, like Rivera spending his entire career with one organization. He was tracking at 90.3 percent support this year; players’ final totals usually drop by 5-7 percent from the vote-tracker.

Martinez would join 2014 inductee Frank Thomas as the only players in the Hall who played a majority of their games as a designated hitter. David Ortiz is likely to make it three when he becomes eligible in 2022.

Six players were inducted last year, included four voted in by writers — one shy of the record set in the first year of balloting in 1936.

Including Smith and Baines, 25 people have been voted in since 2014.

“My numbers match up well with guys who are in the Hall of the Fame,” he said when he retired.

Bonds and Clemens, both on for the seventh time, also are gaining as younger voters appear less inclined to withhold support because of allegations of steroids use. Bonds rose to 56.4 percent last year from 36.2 in his first appearance, and he was tracking at 71.2. Clemens increased from 37.6 percent in 2013 to 57.3 last year and was tracking at 71.7.

Schilling, also in his seventh appearance, rose from 51.2 last year to 69.9 in this year’s tracker. Their best chance could come in 2021, when no first-time candidates are odds-on favorites. Jeter heads the newcomers on the 2020 ballot.