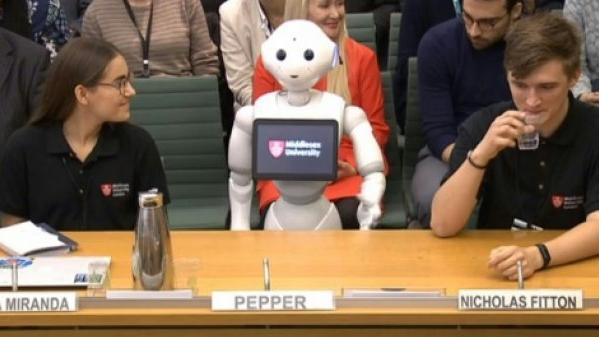 A walking and talking robot appeared in Britain's parliament for the first time on Tuesday, prompting Twitter users to seize the chance to heap more mockery on Theresa May.

The latest round of public amusement at the expense of the British premier came during a committee hearing on artificial intelligence (AI) and "the fourth industrial revolution".

MPs on the education committee invited a robot named Pepper – a white female creation with an excruciatingly thin waist and a tablet computer stuck to her chest – to answer some basic questions.

Asked whether humans would have a place in a brave new world where AI reigns supreme, Pepper responded in a reassuring voice.

"Robots will have an important role to play, but we will always need the soft skills that are unique to humans: to sense, make, and drive value from technology," the robot said.

She was asked about a few more completely unscripted matters before panelists moved on to discuss ethics and social injustice.

Pepper listened and twirled her head a few times.

Comparisons to the premier's propensity to dance in a robotic manner and speak with methodic precision – traits that earned her the nickname "Maybot" – quickly appeared on Twitter.

"Thats fantastic....but can it do the Maybot," asked someone named Hugh Duffy.

And even the popular Politics Home website chipped in with, "NEW: A witness gave a robotic performance in front of a Commons committee? but it wasn't Theresa May."

The British leader has turned into a subject of periodic jokes on social networks as she struggles for pull her country out of the European Union without causing too much damage.

She has particularly taken to dancing – something she did twice during an August trade mission to Africa and then at a Tory party conference this month.

Her moves did not earn high marks from bemused Britons. They also spawned an entire family of Maybot Twitter accounts pretending to speak in the prime minister's name.