Along a quiet residential street on the outer edges of Beijing, a yellow and black cube about the size of a small washing machine trundles to its destination. This “little yellow horse” is an autonomous delivery robot, ferrying daily essentials like drinks, fruit and snacks from the local store to the residents of the “Kafka” compound in the Chinese capital. 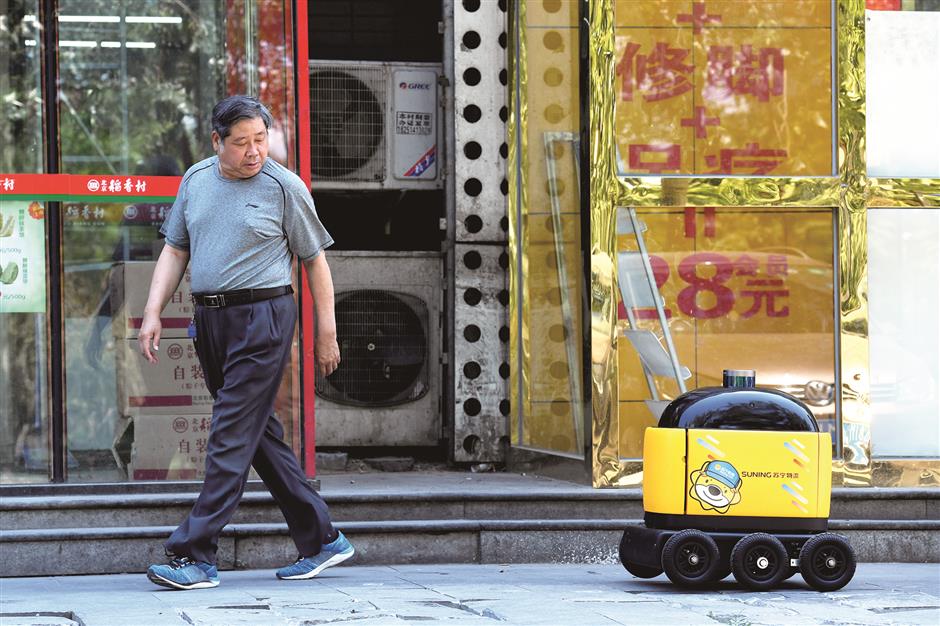 A man looks back at a Zhen Robotics delivery robot as it makes its way back to a supermarket after making a delivery in Beijing. (Photos: AFP)

Equipped with a GPS system, cameras and radar, the robots are seen by their creator as the future of logistics in China, where he says 1 billion packages will be delivered every day. Traveling at a less than overwhelming 3 kilometers per hour — a slow human walk — the robot has room for improvement, said one customer.

“The weak point is that it cannot deliver directly to the door like a human,” said the customer. “But it’s still quite practical. The robot delivers relatively quickly.”

China is the world’s biggest online shopping market with more than half of its population making at least one smartphone purchase per month, according to professional services firm PricewaterhouseCoopers. This compares to 14 percent in the rest of the world.

To get a delivery via the “little yellow horse,” the customer selects the desired products, taps in the address and pays via their phone. The supermarket staff place items in the robot and off it goes.

Liu Zhiyong, founder and CEO of Zhen Robotics, which manufactures the robot, sees a bright future for his creation.

“At the moment, there are 100 million packages delivered every day in China. It will be 1 billion in the future,” Liu said. “There will not be enough humans to make the deliveries. We need more and more robots to fill this gap in manpower. And to reduce costs.”

These costs are especially high in the last kilometer of a delivery, where precision is key and a customized service is required to get the product to the front door. At the moment, the yellow robots in the Kafka compound have little to trouble them, moving along a wide pavement with no obstacles — and no cars.

Weighing 30 kilograms and with a theoretical top speed of 12 kilometers per hour, the robots have four cameras constantly scanning the world around them and a laser tele-detection system allowing them to avoid obstacles.

Liu’s firm has already signed up Suning, a large electronics firm that also runs a network of small supermarkets.

But not everyone is convinced the robots are a long-term logistics solution.

Shao Zhonglin, former deputy secretary-general of the China Express Association, said: “It’s not certain they can be a broad solution for the final kilometer of delivery. Because the client still has to come down to get his package. Plus the costs remain quite high: buying and maintaining the robots etc.” 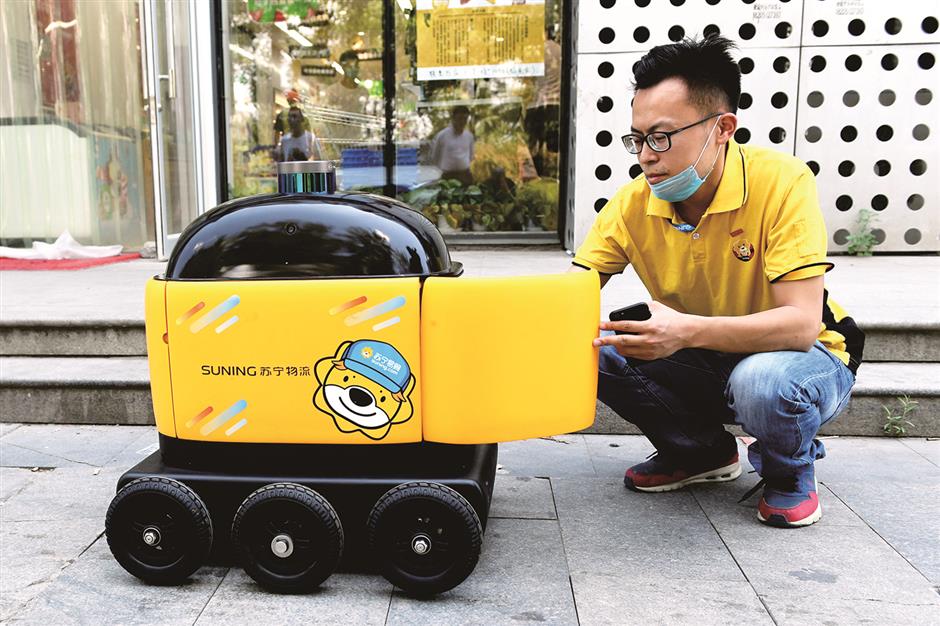 A Suning worker loads a delivery robot with groceries during a demonstration of the robot in Beijing. Along a quiet residential street, a yellow and black cube about the size of a small washing machine trundles leisurely to its destination.

But Zhen Robotics is convinced the costs will come down over time. Liu also says the robot will soon be equipped with the necessary technology to operate a lift, meaning it will no longer be confined to ground-floor deliveries.

In the meantime, deliveries in China are being made by autonomous means. In recent months, several firms have received the green light to operate drones, either to deliver directly to the customer or to ferry goods between hubs.

And Liu has a warning for anyone trying to steal the yellow robot.

“With GPS, we are constantly tracking them, cameras are filming and it can sound an alarm,” he said.

“Anyway, what would a thief do with it? It’s not exactly resellable.”