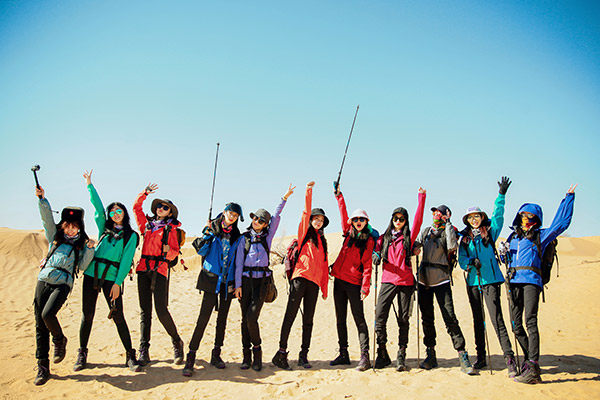 The young members of Rocket Girls 101, a pop music group, in the Sahara Desert for the shooting of an adventure reality show. (Photo: China Daily)

Members of the all-female pop group are jettisoned out of their comfort zone, Xu Haoyu reports.

In December, it was arranged for them to live in the Sahara Desert and the Carpathian Mountains as part of an online adventure reality show, Hengchongzhizhuang Ershisui ("the 20-something adventurers"), produced by Tencent Video.

During the trip, there were tears and there was laughter-tears due to the unfamiliar and extreme conditions that challenged their physical and psychological strength, and laughter born from their sisterly concern for each other and the courage they summoned to conquer the difficulties they faced.

"Before their departure for the desert, our production team asked these young women how they perceived the rampaging age of the 20-something and they provided their own answers," Xie Dikui, director of the show, said at a promotional event in Beijing on Jan 11.

Wu Xuanyi, 23, responded to the question: "At my age, I am fearless of pain or failure."

Another participant, 20-year-old Meng Meiqi, said: "Being a 20-something means I can do what I want without regard to the danger or the consequences of my actions."