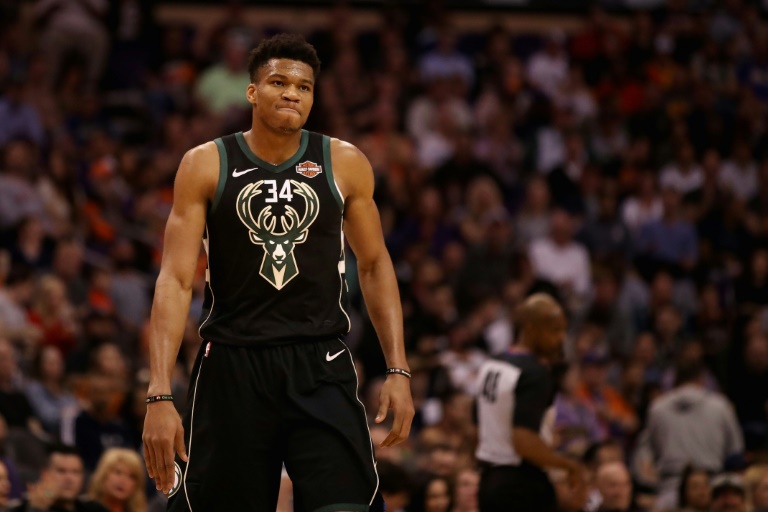 Giannis Antetokounmpo of the Milwaukee Bucks did not play in a loss to Cleveland but made his presence felt in a 127-105 win four nights later. (Photo: AFP)

James Harden delivered 28 points as the Houston Rockets punched their ticket to the NBA postseason with a 113-90 win over the New Orleans Pelicans on Sunday.

Harden, who scored a combined 118 points in his previous two games, didn't need to maintain his torrid pace against the Pelicans.

The Rockets led by 19 at the half and Harden's supporting cast did their job by shutting down the Pelicans in the second and not allowing them to get back into the contest.

"We were professional tonight from the beginning of the game," Harden said. "We've had previous games where teams weren't as good, or whatever you want to call it, and we kind of let up and we let one slip. So that was a good job from top to bottom."

NBA scoring leader Harden exploded for a career-high-tying 61 points in a win over San Antonio on Friday after netting 57 points in a loss to Memphis on Wednesday.

Harden, who is averaging 36.4 points per game, hit 10 of 19 shots from the floor and made six threes for the Rockets, who remained in third place in the Western Conference.

Elsewhere, Giannis Antetokounmpo tallied 26 points and 10 rebounds as the NBA-leading Milwaukee Bucks avenged a loss to Cleveland earlier in the week by beating the Cavaliers 127-105.

Antetokounmpo missed two of the three previous games with an ankle injury and did not play four days ago when the Cavaliers beat the Bucks 107-102.

He had a big impact on Sunday, adding seven assists, blocking four shots and shooting 11-of-16 from the field in 32 minutes of playing time.

Milwaukee improved to a league-leading 55-19 record, ahead of the Toronto Raptors, who are 51-23.

George Hill, who was traded to the Bucks by the Cavaliers in December, and Khris Middleton scored 17 points each, and Brook Lopez scored all 14 of his points in the first half for Milwaukee.

Kevin Love finished with 20 points, 19 rebounds and four three pointers in the loss.

In Oakland, Stephen Curry returned from a rest game to score 26 points, Klay Thompson finished with 24 and the Golden State Warriors rebounded from an embarrassing blowout loss with a 121-114 win over the Detroit Pistons.

The Warriors decided to rest Curry on Saturday and it cost them as they were clobbered 126-91 by the Dallas Mavericks.

He came back strong against the Pistons as Kevin Durant also finished with 14 points and 11 assists.

The Warriors improved to 50-23 on the season and moved back into the first seed in the Western Conference by a half-game over Denver. This is the sixth consecutive season Golden State has reached 50 wins.

"It's kind of surreal, to be honest," Warriors guard Curry said after the game. "You talk about the history of the organization, how hard it is to win NBA games, win championships and string together (wins) year after year after year."

Also, Lou Williams scored 15 of his game-high 29 points in the fourth quarter as the Los Angeles Clippers won their fifth consecutive game with a 124-113 victory over the hapless New York Knicks.

Danilo Gallinari drained a clutch three pointer in the fourth en route to a 26-point performance for the Clippers, who vaulted into sole possession of fifth place in the Western Conference.

The Clippers are trying to win as many games as possible late in the season to improve their playoff position and avoid having to play a top-ranked team like Golden State.

"We're ready to play whoever we end up playing," coach Doc Rivers said. "In the meantime, let's just keep winning games and everything will take care of itself."

The struggling Knicks have now reached 60 losses on the season. They have lost four straight and 12 of their last 13.

New York must win at least three of their eight remaining games to avoid tying or exceeding the worst record (17-65) in team history.