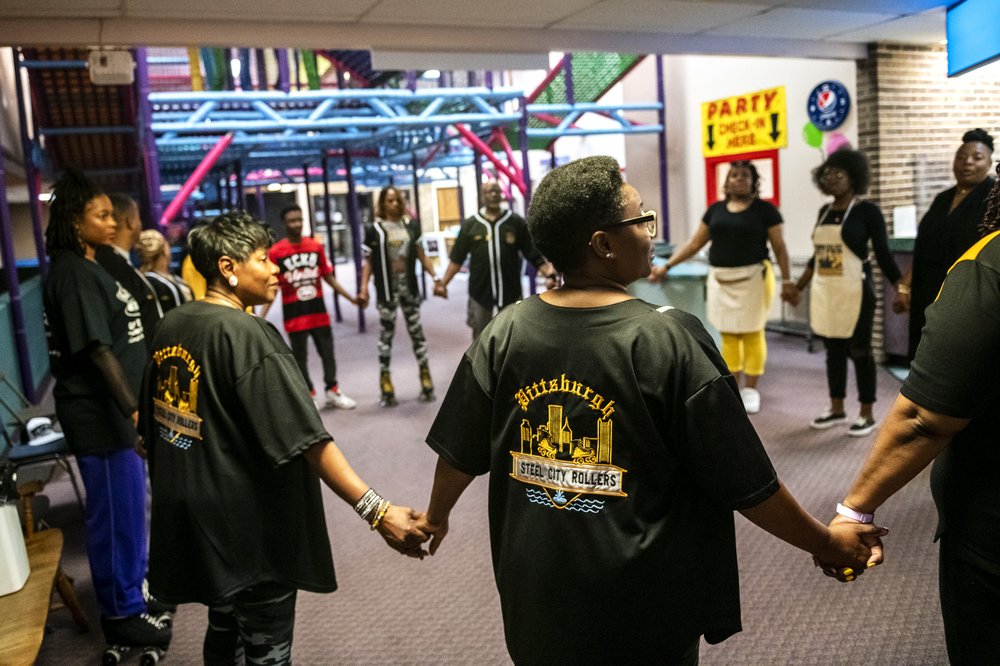 In this Saturday, May 18, 2019 photo, members of the Pittsburgh Steel City Rollers hold hands and pray before the start of their annual Spring Bling Skate Jam, at Youngstown Skates in Youngstown, Ohio. (Photo: AP)

Every Thursday night at the Neville Roller Drome, the Steel City Rollers and other skaters flow out on the floor, some of them performing dance moves, others practicing in a synchronized line.

The 14-member group of African American skaters is a vibrant part of a disappearing pastime.

Roller skating used to be so popular that post-World War II Allegheny County had at least 18 rinks. Only two remain today: the Neville Roller Drome on Neville Island and the smaller Eden Park in McKeesport. Among some enthusiasts and especially among the African American community, the affection for roller skating never died.

Closing is far from Neville Roller Drome owner Jim Park’s mind. “We do have expansion plans,” he said. “We want to build a sport future.” He sees his family opening a multi-floor family entertainment center within five years.

Several years ago Mr. Park responded to requests to have an adults-only night for skating, and his staff takes the age limit seriously. Patrons are carded upon entry to make sure they are at least 18. In many cities, African American skaters make up the largest proportion of the people at Adult Nights. The term “Adult Night” is often code for Black Night. But at the Roller Drome, the crowd is about half white, and a community atmosphere prevails, with hugs and smiles exchanged among skaters and references to the “skate family.”

In addition to their regular Thursdays, the Steel City Rollers travel to various roller skating parties in North America.

“I was over the whole party scene, but I still wanted to go out . and this is a lot healthier and a lot of fun. I met a lot of friends here,” said Brittany McNeill, 27, of Homewood North.

The modern-day world of roller skating is on display in the February 2019 HBO documentary “United Skates.” It details how skaters in different cities develop different styles and signature moves: Chicago does JB skating — a form of high stepping and occasional dips named for James Brown. California has the Cali Slide, a smooth series of turns. Baltimore has snapping, where a skater spins or turns on one foot to face the opposite direction. Detroit has sliding — skating as hard and fast as they can sideways. And Pittsburgh?

“We can do everything every other city can do, but they can’t do everything we do,” said Dawna “Ms. Pittsburgh” Biggs, 58, of the Hill District.

Synchronized skating in a line goes by many names: stepping, strutting, shuffling, striding. When a venue holds a silent skate party, skaters wear headphones to hear one of several channels of music. The color of the lights on the headphones indicates which channel each skater is listening to.

Some skaters put colored lights that flash on and off under their skates. Some people customize their skates with small wheels that allow the skater to move sideways. The Pittsburgh club doesn’t use small wheels, which are harder than regular wheels and can ruin a rink floor.

“United Skates” shows the slow disappearance of roller skating rinks in spite of their popularity. Property values have gone up, making rink owners more willing to sell. Also, many rink owners have aged and don’t have succession plans. When an owner retires, his or her rink often closes.

“We don’t want any more rinks shutting down,” Meadows said. He remembers the Ardmore Rolling Skating Palace in Forest Hills, the Coliseum in Homewood, the Ches-A-Rena in Cheswick, the Spinning Wheels in Castle Shannon and the Romp N Roll in Shaler, all closed now. Many recreation centers used to include skating on their gym floors. These venues began slowly closing through the decades, with many shutting in the 1990s.

“A lot of us grew up skating,” Meadows said.

“When we put our skates on, it’s just about the release of the day,” said Brent Robertson, 69, of McKeesport. “That’s what bonds us together.”

The history of skating was tainted by racism. De facto segregation kept black skaters out of most rinks nationwide until the civil rights era. In PIttsburgh the only rink open to black skaters initially was the Pythian Temple Roller Rink inside a black social club in the Hill District. It opened in 1935 and closed about two years later. The white proprietors of the Penn Roller Skating Rink in 1938 canceled a skate party when they learned that some of the guests would be African American. The Diamond roller rink on the North Side opened to black skaters in 1953, under pressure from the national Congress of Racial Equality. In 1960, members of the largely African American Perry High Y-Teens Club were denied entry to the Chateau Roller Rink in Coraopolis. The owners were found guilty of violating state law and gave a public apology.

While racial tension is no longer an issue at Pittsburgh rinks, it lingers in other cities. In Euclid, Ohio, outside Cleveland, police are trying to shut down the historically black Pla-Mor rink allegedly because of fighting outside the rink. The Steel City Rollers traveled to Cleveland in June to support keeping the Pla-Mor open.

Skating’s continued appeal may be linked to its relatively low cost. Admission to the Roller Drome rink costs $10, $3 for skate rental. Skates can cost between $60 and $1,500, and they can last more than a decade. Learning to roller skate does not require paid lessons, at least for the kind of skating the Steel City Rollers do. It does require dedication. When India Garner, 34, of Moon decided she wanted to learn, “I’d record it (at the rink) and practice it” at home, she said.

And skaters love the health benefits of skating. Sayings about stress relief include “leave it on the wood” and “roll until the wheels come off.”

Adults often teach children how to skate. James “Buddy” Bey, 62, of Wilkinsburg keeps a stuffed toy monkey pinned to his shirt when he skates, a gift from a young girl he taught to skate. It reminds him of his teacher, Will McDowell, who died of a heart attack on a roller skating rink floor in the early 1990s.

The Rollers will be honoring the 85th birthday of longtime skater Bob Trent on Sept. 22 at the Roller Drome. Trent skates with a walker.