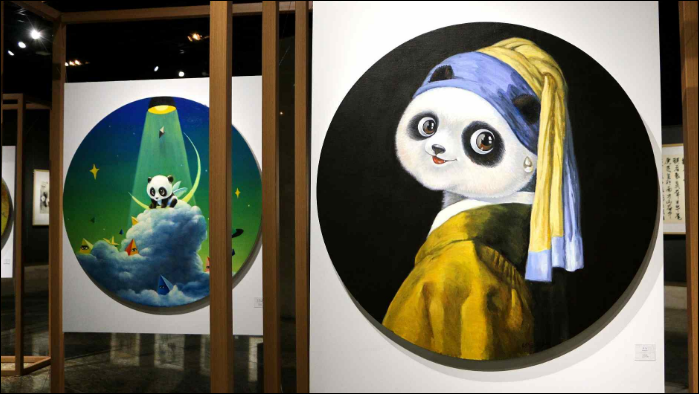 Cute images of pandas are on display at the exhibition in Beijing, China, August 23, 2018.(Photo: VCG)

Pandas with a Mona Lisa smile or an agonized scream, or those playing the zither and dressed up as the ancient Chinese philosopher, Confucius – Yes, these are what you can expect during the first Giant Panda International Culture Week in Beijing.

The opening ceremony of the culture week and a series of exhibitions were held in the China Millennium Monument on Thursday in Beijing. The exhibitions will run until Sunday.

Themed "Sharing Panda Culture With the World," an art exhibition presents the audience with cute images of pandas and various cultural products including cups, ceramic sculptures, and envelopes, as well as lanterns.

Two amusing videos displayed in the exhibition show the audience lively pandas in dozens of world-renowned paintings including "Girl with a Pearl Earring," "Last Supper," and "The Scream." The audience can paint cheek rouge on their own ceramic panda dolls and play with the wild animal in virtual reality games as well.

Besides the modern artwork, pandas also appear in the intangible cultural heritage items and traditional Chinese cultural handicrafts such as paper cutting, printmaking, and bamboo weaving.

The cultural week announced the launch of a competition for international artists to design new images of the animal as a cultural symbol in 2019.

"Pandas are one of the most popular cultural symbols of China," said Li Wei from Peking University. In a survey that the university conducted in 2016, the giant panda ranked first in countries including Russia, the United States, and Japan and second in India following the Great Wall, said Li.

For Zhang Hemin, researcher and deputy director of the China Conservation and Research Center for the Giant Panda, there is another reason people love pandas.

"The quiet and mild-mannered pandas with their relaxed lifestyle demonstrate the green, peaceful and tranquil life that human beings have long dreamed of," said Zhang.

As China's envoy for friendship, the animal not only brings happiness to Chinese but also helps raise public awareness of wildlife protection.

"Unlike some now extinct species, giant pandas have survived natural selection for over eight million years. They serve as the symbol of global efforts to protect biodiversity and promote the public awareness of environmental issues," said Tu Ruihe, representative of the United Nations Environment Programme to China.

"China, together with the United Nations, will further enhance cooperation in the organization of COP15 of the Convention on Biological Diversity in 2020," said Tu.

In a bid to protect the vulnerable species, China has established 67 nature reserves, protecting 53.8 percent of its natural habitats and 66.8 percent of the species in the wild, according to Li Chunliang, vice administrator of the National Forestry and Grassland Administration.

Easily recognized by black patches around its eyes, over the ears and across its round body, the chubby panda lives in the mountains of northern Sichuan Province as well as southern Gansu and Shaanxi provinces.

There are more than 1,800 wild pandas and over 500 pandas bred in captivity in China, Li said.