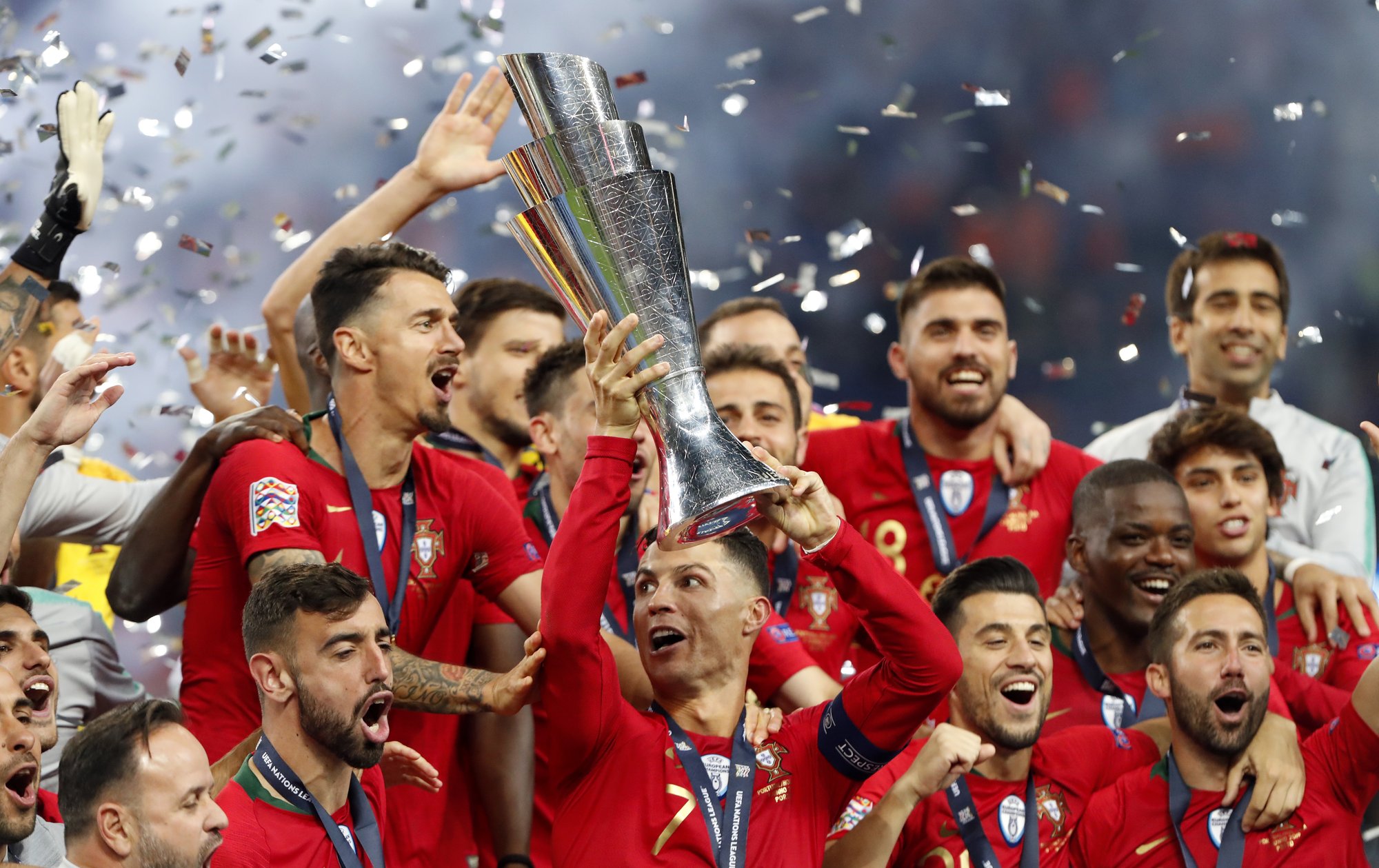 Portugal players celebrate with their trophy after defeating the Netherlands 1-0 in the UEFA Nations League final soccer match at the Dragao stadium in Porto, Portugal, Sunday, June 9, 2019. (Photo: AP)

Three years after conquering European soccer for the first time, Portugal and Cristiano Ronaldo are celebrating another international title.

Portugal won the inaugural UEFA Nations League tournament on Sunday, beating the Netherlands 1-0 to lift its first trophy since the 2016 European Championship.

Ronaldo, coming off a hat trick in the semifinals, lifted the winners’ trophy but wasn’t much of a factor in Sunday’s final, with the only goal coming from midfielder Gonçalo Guedes early in the second half at the Estádio do Dragão.

The hosts’ victory in UEFA’s newest competition, created to give national teams more meaningful matches than just friendlies, denied the Netherlands its first trophy since the 1988 European Championship. The revamped Dutch team was seeking some redemption after failing to qualify for the 2018 World Cup and the 2016 European Championship.

Ronaldo couldn’t do much against Dutch defender Virgil van Dijk in the matchup of likely contenders for the player of the year award, but Guedes couldn’t be stopped when he hit a powerful right-footed shot from outside the area in the 60th minute.

Guedes started the build-up to the goal with a pass to Bernardo Silva, receiving the ball back at the top of the area and firing a firm low shot past Dutch goalkeeper Jasper Cillessen, who touched the ball but couldn’t parry it away.

The Dutch had impressed in the group stage of the Nations League by eliminating the last two World Cup champions — France and Germany. It made it to the final after beating England 3-1 in the semifinal on Thursday.

“At the start of this tournament I don’t think anyone would have believed us if we’d said we’d reach the final,” said Van Dijk, who hadn’t faced Ronaldo since the 2018 Champions League final between Liverpool and Real Madrid. “We’ve made a lot of progress. We have to be very proud of ourselves. Now disappointment is in our heads but we have to keep heads up. It’s been a good season.”

Portugal, which eliminated Italy and Poland in the group stage and defeated Switzerland in the semifinals, had lost the 2004 European Championship final at home to Greece, but this time it got to celebrate the title in front of its fans after a scrappy match in Porto.

The hosts were in control most of the match but struggled to get past the stout Dutch defense led by Van Dijk and Matthijs de Ligt.

Ronaldo’s best chance was a header that went straight to Cillessen’s hands about 30 minutes into the first half.

The Dutch improved after halftime but couldn’t create many significant scoring chances, with Memphis Depay coming closest with a 65th-minute header saved by goalkeeper Rui Patricio.

The Netherlands kept pressing but Portugal was able to hold on to clinch the first Nations League title.

“It was a bit better in the second half, and then the goal was (scored) and it became even more difficult because they are masters in defending when they are ahead,” Netherlands manager Ronald Koeman said. “We were not good enough tonight.”

Santos made changes from the team that defeated Switzerland 3-1 in the semifinals, taking out 19-year-old Joao Felix from the starting lineup and adding Guedes to the attack. He also used Danilo in midfield and Jose Fonte to replace the injured Pepe in the middle of the defense.

Koeman kept the same squad that defeated England in the semifinals.

Some of the loudest chants at the stadium came from English fans who likely had expected their national team to reach the final. England ended third after defeating Switzerland 6-5 in a penalty shootout earlier Sunday in Guimaraes.