Football fever continues to spread in China well after the World Cup with the arrival of former Real Madrid striker Cristiano Ronaldo in Beijing. 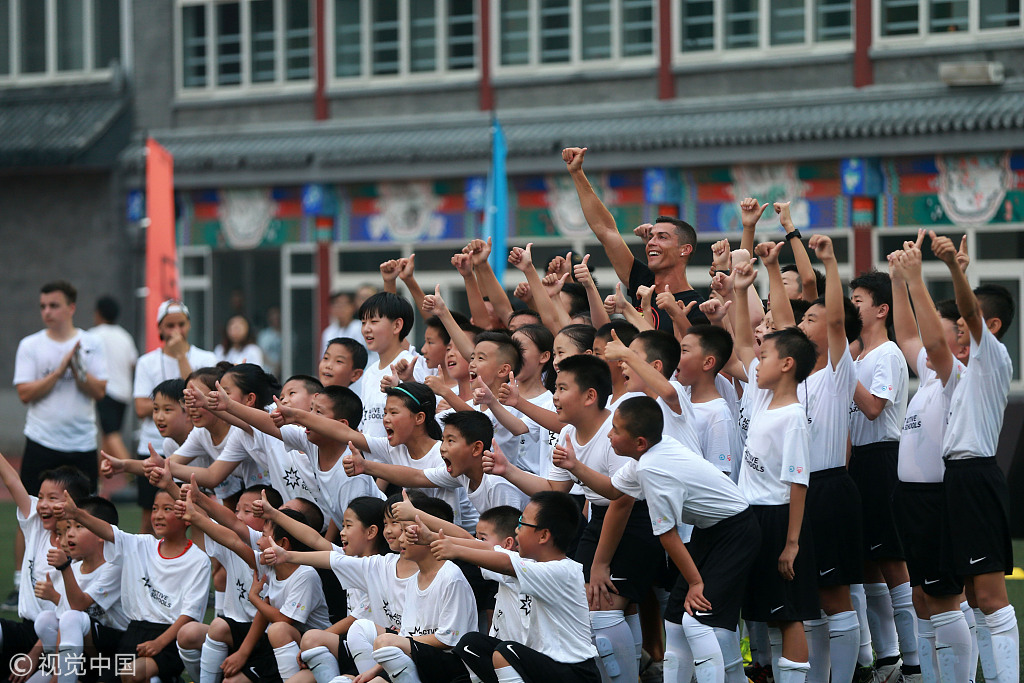 Hundreds of screaming fans gathered at the Forbidden City on Thursday to catch a glimpse of the Portuguese star, who is set to end his two day annual CR7 Asia tour after representing his main sponsor Nike on a PR tour for the second year running.

Just days after putting pen to paper on his transfer to the Italian club Juventus on a four-year contract worth 117 million US dollars, the international icon addressed his adoring fans in the Chinese capital.

But the Juventus player’s visit goes far deeper than just the standard meet and greet, his time in China over the past two years has also included several opportunities to support the country's grassroots football effort.

After President Xi Jinping’s football reform drove huge investment into the sport there has been revived emphasis on grassroots level, spurred on by his desire for China to not only host a World Cup, but also win one by 2050.

The Chinese Football Association set new regulations that help their home-grown talent, requiring clubs in the Chinese Super League to field the same number of under-23 Chinese as foreign players in each game and cutting overseas players starting quota from four to three.

As a result, the focus has switched to youth development with the aim to have at least 20,000 training academies and 70,000 pitches by 2020. And Ronaldo seems to have jumped on the band wagon.

In 2017, the five-time UEFA Champions League winner was on hand to honor Lv Shao Wu, who brought football to students in the rural, mountainous area of Longxi County in northwestern Gansu Province, which culminated in Ronaldo donating a soccer field to the primary school.

While on Friday, the 33 year old attended the final of a series of matches of Nike's football schools in Chinese mainland and formed the Active Schools CR7 Sports camp, which he said on Instagram aims at “providing access to kids from remote areas in China”. 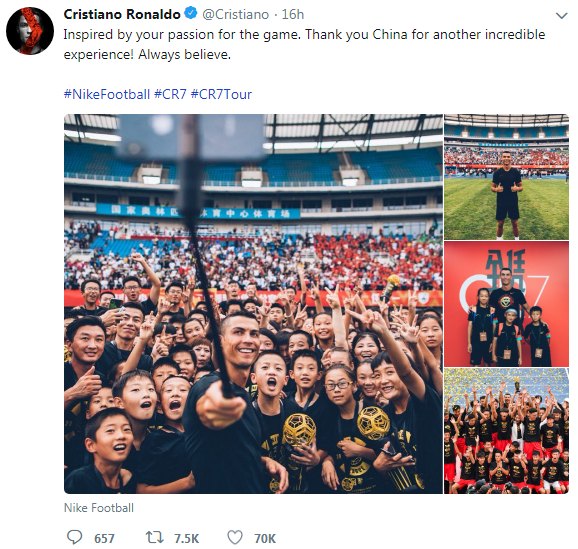 During his visit he also gave advice for developing football in a country that has aspirations of becoming a world football powerhouse.

“Give opportunities to the kids, give them good possibilities, good pitches, open doors for them because the kids are the future,” Ronaldo said, adding that the younger generation should "keep going, work hard, believe and never give up."

It’s not only Ronaldo that see’s the potential of football growth in China, but also multinational sports brands after they bore witness to President Xi’s 50-point plan in 2015 to turn China into a 813-billion-US-dollar sports industry with a special focus on developing football.

Since then substantial investments have been shaping the football landscape as regional and local governments implement infrastructure, both at amateur and elite level to accelerate the natural course of the sports development.

In an environment that has seen football newly implemented in the curriculum, millions of school children in China will have the need for equipment such as trainers, boots and shin pads, making sports clothing one of the sectors most likely to see the highest growth.

International sports brands such as Nike anticipated this rise and coinciding with Ronaldo's China tour, the company launched their exclusive C罗 collection that symbolizes Chinese culture and tradition. Made with a pattern that includes an ancient boat compass, the captain's "C" and a new Chinese-character version of Ronaldo's famed CR7 mark (C罗) suggests the player's metaphoric ability to breath fire into Chinese football.

The limited edition China only boots, costing 2,499 yuan (369 US dollars), have already sold out on the Nike China online store, reflecting the country's huge football market that has seen average attendance at CSL football matches increase from 10,000 to just fewer than 25,000, a growth of almost 150 percent over the last 10 years.

Then there's Nike’s “Dare To Become” new video campaign that was released on Thursday, which feature youth players in the Nike League in Beijing, Shanghai and Guangzhou. The agency described the video as a “future where the greatest football player, long after Cristiano Ronaldo retires, is now Chinese.”

There can be no question that opportunities for business are on the rise in China’s sports industry, but only time will tell if Ronaldo achieved what he came to China to do and as he tweeted “inspire the future of football”.