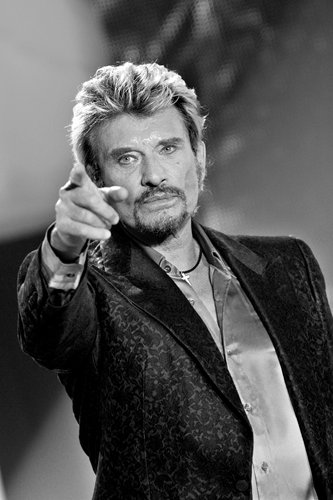 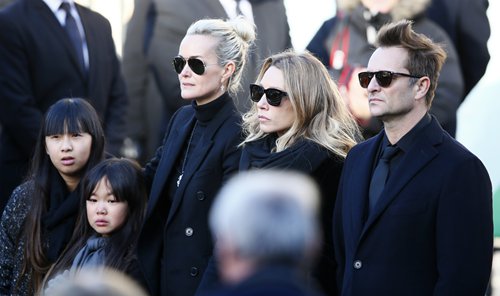 The daughter of French rock legend Johnny Hallyday caused a sensation Monday by challenging his will after he left everything to his fourth wife Laeticia, who was 32 years his junior.Actress Laura Smet laid bare the tensions inside France's first family of showbiz, revealing that she had long been forced to call and meet her father in secret.Hallyday's death in December of lung cancer plunged France into mourning, and brought hundreds of thousands of his fans onto the streets of Paris for his funeral in scenes not seen since the death of Edith Piaf.Smet said she was "stupefied and hurt" after learning that she and her half-brother David - the singer's only two biological children - had been left nothing by the "French Elvis."Instead all of Hallyday's wealth and the remaining rights to the 110 million records he sold will eventually go to the girls he and Laeticia adopted in Vietnam, Jade and Joy.In a statement to AFP, Laeticia said that she had "learned of the media furore around her husband's estate with disgust."In an open letter seen by AFP, Smet, 34, exploded the myth of the "united front" that Hallyday's extended family managed to maintain for the huge "people's tribute" of his funeral, where French President Emmanuel Macron called him a "national hero."She also strongly hinted that Laeticia, a 42-year-old former model, prevented her from seeing her father before he died aged 74."It is still killing me not to have been able to say goodbye to you, Papa - do you know that at least?" Smet wrote."So many questions without answers. All those times when we had to hide to see and call each other," she said. Yet "I found out a couple of days ago that you have rewritten your will to totally disinherit David and me," Smet wrote. Heart-rending letter"It was only a few weeks ago that we were having a meal together and you said to me, 'So when are you going to have a child?'"But what can I tell that child about you, someone whom I have admired so much?" she asked.Responding to the storm, Laeticia added that she was "calm and will not stop devoting all her energy to ensuring the work and memory of her husband are respected."Smet's lawyers said David Hallyday, whose mother was 1960s pop star Sylvie Vartan, was also contesting the "rewritten" will which was made in California, where Hallyday spent much of his later life, under the American state's law.Under French law, a wife does not automatically inherit all of her husband's estate, and generally must share it with his children.In the heart-rending letter Smet, whose mother is the actress Nathalie Baye, said her father comes to her in her dreams every night. "You are handsome, with no tattoos, you are finally free..." 'I love you Papa'Hallyday began getting tattoos in the 1990s around the time he met Laeticia in Miami, marrying her just after she turned 21 in 1996."I would have preferred if all this had stayed within the family," Smet wrote, "but unfortunately, in our family this is how it is. "I am proud to be your daughter. I love you Papa," she added.Smet - who reportedly attempted suicide after her father nearly died in 2010 - was left without "a souvenir - one of his guitars or motorbikes, not even the sleeve of the song 'Laura,'" her lawyers told AFP. Two other giants of French music, composer Maurice Jarre, who wrote the score for Doctor Zhivago and Lawrence of Arabia, and Madonna's musical arranger Michel Colombier, also disinherited their children.Later both Jarre's son, electronic composer Jean-Michel Jarre and Colombier's older children, lost their bids in French courts to challenge the wills.But Smet's lawyer Pierre-Olivier Sur told AFP said both men had long broken their ties with France, whereas Hallyday "had a home in France, sang in France until his last breath and had a national funeral presided over by the president."Although Hallyday was never taken seriously abroad, he was by far the best-known rocker in France. The fanatical biker's funeral procession through Paris was escorted by hundreds of leather-clad motorcyclists, and others followed the coffin to his burial in the Caribbean island of St Barts. Born Jean-Philippe Leo Smet, he took his stage name from an American relative and mentor, Lee Halliday, who introduced him to rock 'n' roll.