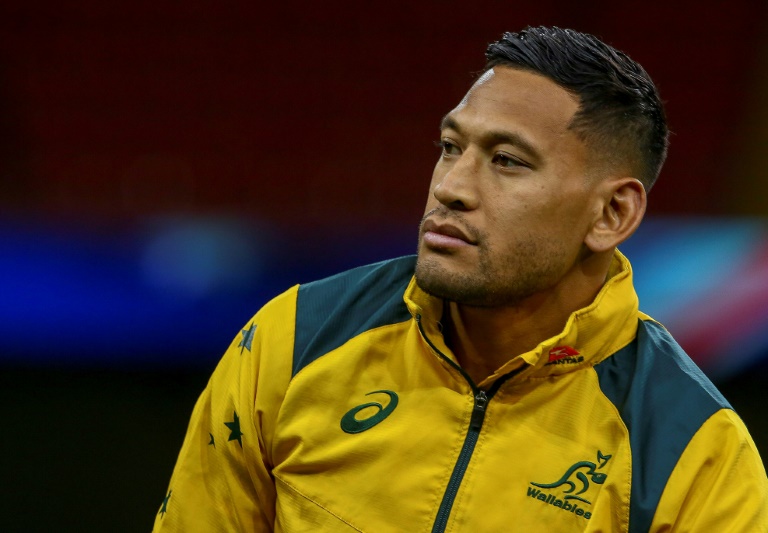 On the attack: Israel Folau has accused Rugby Australia of divulging confidential details of his code of conduct hearing. (Photo: AFP)

Rugby Australia has lashed out at Israel Folau for disrupting the sport after an explosive letter accusing the governing body of leaking details of his code of conduct hearing was made public.

Folau sent the letter to the Rugby Australia board after Sydney's Daily Telegraph ran a series of stories last week on his dramatic fall from grace for homophobic comments on social media.

The reports included intimate details of his tribunal hearing, which was meant to be private.

Super Rugby's record try scorer opted not to appeal against the ruling that he was guilty of a "high level" breach of the sport's code of conduct and instead launched legal action, asserting he was simply posting a message from the Bible.

In his letter, which was also obtained by the Telegraph and published on Saturday evening, Folau alleged that Rugby Australia was the source of the leaks, which he called "blatantly unfair".

"I would like to know why Rugby Australia has not managed to maintain the integrity of its processes and ensure that information was kept private and confidential," he said.

"For example, I am not 'sick of rugby' and whoever told the media that I am is telling lies.

"Another example is the way the media has been told that your expectations were made clear to me by Ms (Raelene) Castle. We all know that is far from the truth," he added, referring to Rugby Australia's chief executive.

"It makes me sad that these things have apparently been told to the media by someone at Rugby Australia. If you are not the source, why has no one come out to set the record straight?"

Rugby Australia hit back in a statement, saying the "media campaign" being run by Folau's camp was affecting all levels of rugby and had overshadowed a crunch Super Rugby match between the NSW Waratahs -- Folau's former team -- and the ACT Brumbies in Sydney.

"Rugby Australia has acted with complete professionalism and integrity at all times through the process in which Mr Folau was found by an independent three-member tribunal panel to have made multiple, serious breaches of the Professional Players Code of Conduct," it said.

"While we will continue to respond to any legal action as required and will continue to defend the values that underpin our game and the work done by the hard working volunteers, we will not engage in a running media commentary."

Folau's Instagram post that "Hell awaits" gays and others he considers sinners sparked heated debate in Australia, with some defending his right to express views he sees as central to his religious beliefs.