Rural moms better than urban moms at breastfeeding in China 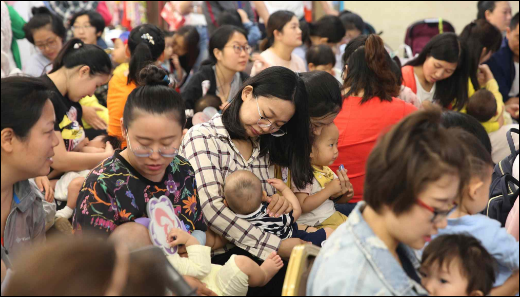 In a bid to raise awareness about breastfeeding, mothers feed their babies at a shopping mall in Shijiazhuang, capital of north China's Hebei Province, May 20, 2018. (Photo: VCG)

Megacities and rural areas in China are showing better awareness of breastfeeding while small and medium cities are lagging behind, a new finding presented at a forum in Beijing revealed.

Nearly, 48.6 percent of mothers living in megacities feed their newborn babies with breast milk and water. In rural areas, 60.8 percent mothers follow the same diet regimen for their babies. Strikingly, in medium and small cities, this practice spirals to a whopping 67.6 percent.

Lactating mothers in rural areas perform even better in terms of feeding their babies with less formula milk. Only 20 percent of mothers in villages feed formula milk along with breast milk. In megacities, small and medium cities, nearly 32 percent and 31.2 of mothers respectively follow the similar practice.

According to the World Health Organization (WHO) giving water to young babies puts them at risk of diarrhea and malnutrition. Water or formula milk may also cause the baby to drink less breast milk or to stop breastfeeding early and therefore cause malnutrition.

Representatives from the Bill and Melinda Gates Foundation, UNICEF and government officials also attended the event.

Overall, 61.2 percent of mothers who feed their babies with breast milk also feed them with water. Nearly, 32.5 percent mothers feed breast milk and include formula milk, and 6.3 percent face difficulty in lactating after childbirth.

China is strengthening more than 7,000 Baby Friendly Hospitals (BFH) as a part of an initiative to increase "exclusive breast," the practice of feeding a newborn only with breast milk for the first six months, from 27 percent to 50 percent by 2020.

“Our data suggests there should be more focus on small and medium cities, also a robust national initiative to achieve this target,” Mai added.

In the last few decades, breastfeeding has become a global challenge. Almost 60 percent of babies are deprived of mother's milk within the first hour after their birth, making them prone to sickness and low immunity, a global report released jointly by UNICEF and WHO on Tuesday revealed.

“Apart from strengthening BFH, China has also taken steps to reduce the number of cesarean section births. We are well prepared to take on the challenge in the wake of two-child policy,” Cao Bin, deputy inspector, department of maternal health said.