CULTURE Rural teacher rewarded by success of his students

Rural teacher rewarded by success of his students 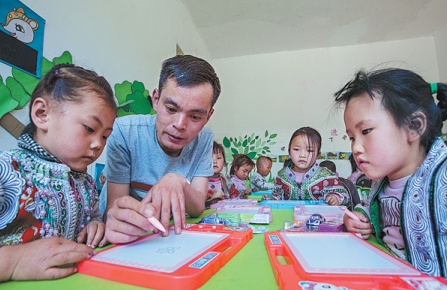 Yang Ming gives a painting class to children at a kindergarten in Qianxi county, Guizhou province, in 2018. (Photo: agencies)

After Yang Ming saw a recruitment notice seeking volunteer teachers in rural areas in 2009, he quit his job in Hangzhou, Zhejiang province, and signed up for the one-year project. Yang, then 25, could have earned 10,000 yuan a month working for a foreign trading company, but instead he chose to accept a volunteer teaching job in Guizhou province.

He taught Mandarin at Wachang Primary School in Qianxi county, Bijie, and received a monthly stipend of 500 yuan. Wang lived in a 30-square-meter room with another teacher and their only neighbors were cows. Sometimes fleas and mice kept them company.

Due to a water shortage in the county, they had to fetch water from an underground river in a cave. Every week, they walked 4 kilometers across hilly terrain to the nearest town to buy food and daily necessities. The project ended in 2010, but Yang decided not to return to Hangzhou. For the next decade, he dedicated himself to teaching the less-privileged children in Qianxi.

"At that time, my parents wanted me to work for a company in a big city, but I preferred rural life and staying with children who reminded me of my childhood," Yang said.

"When they say 'Hello, teacher' to me, my heart is filled with happiness."

He now teaches math and computing to primary school students at Jinxiu School. As most of his students are left-behind children whose parents are migrant workers, Yang visits their homes outside school hours to witness firsthand the difficulties they face in their daily lives.

During a home visit last month, Yang learned that a student was having some psychological problems. The boy was being bullied by his classmates for having no parents. "The 10-year-old boy lives with his grandparents," Yang said. "His father died from disease when he was 8 months old, and his mother remarried and left the county. He always felt he was inferior to other children, which affected his academic performance."

Yang took matters into his own hands. "To make him feel secure, I told him that I would treat him like my own son and support him financially. After hearing that, he was so happy and kept calling me 'father'."

Yang is not only a teacher, but also a parental figure to his left-behind students. He takes them to the hospital when they are sick and during mid-autumn festivals makes mooncakes with them. During harvest season, he helps the children and their grandparents with farm work.

"I am happy being with them and seeing them grow up. They are just like my own children," he said.

Dong E and Dong Lan were two of Yang's students at Wachang Primary School. Dong E graduated from Fujian Normal University and Dong Lan from Guizhou University of Engineering Science this year, and both have applied for teaching jobs in the county.

"When they each told me on the phone that they had decided to become a rural teacher like me, I felt gratified to see students from the mountain return. My efforts had paid off," Yang said.