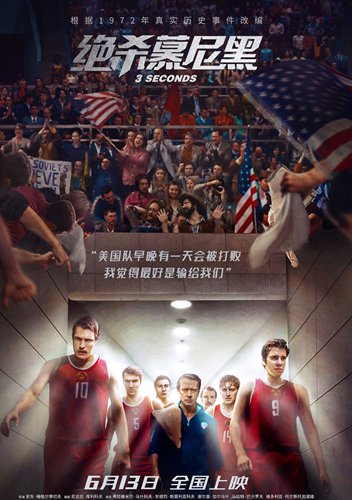 Russian sports film Dvizhenie Vverkh (3 Seconds) reached a total of 74.78 million yuan ($10.89 million) at the box office on Thursday, according to Chinese ticketing platform Maoyan, breaking the 74.22 million yuan record for highest-earning Russian film set by The Snow Queen 3: Fire and Ice in 2018.

As of Monday morning, the total box-office take in the Chinese mainland for the film, based on the real life match between the USSR and US basketball teams at the 1972 Munich Olympic Games, was 80.19 million yuan.

Debuting on June 13 in the Chinese mainland, Dvizhenie Vverkh focuses on the events leading up to the historical moment when the USSR basketball team beat out the US team in the last three seconds of their match during the men's basketball final, ending the latter's 36-year championship streak.

Premiering on December 28, 2017 in Russia, the film set the highest box-office record for a domestic film with about 3 billion rubles ($47.43 million).

The film has also done well in China among audiences, earning a 9.5/10 on Maoyan and a 8.3/10 on Chinese media review site Douban.

"What is amazing about this basketball drama is that nearly an hour of the film recreates the final match, it feels like a real live match broadcast," netizen Film Diary wrote on Douban.

According to Chinese movie platform Mtime, the cast and crew spent 28 days filming the 40-minute final competition with six cameras shooting at the same time. The last camera was nicknamed "the sixth basketball player" because it took to the court like the other players and kept moving alongside the athletes to capture the best shots.

According to reports, director of cinematography Igor Grinyakin wore roller skates to film in order to keep up with the action.

The patriotic theme of the film has also been well received by Chinese audiences because it shows the USSR team as open-minded and willing to learn from their opponents.

Netizen Needle in the Ocean remarked on Sina Weibo that "the film is zealous, especially the long shot during the last three seconds. However, there is no fanatical nationalism. Instead it tells the story of how the USSR beat the US at basketball by incorporating the advantages of US training methods, its medical experience and contact lens."