CULTURE Russian gets 2½ years in jail for vandalizing Repin painting

Russian gets 2½ years in jail for vandalizing Repin painting 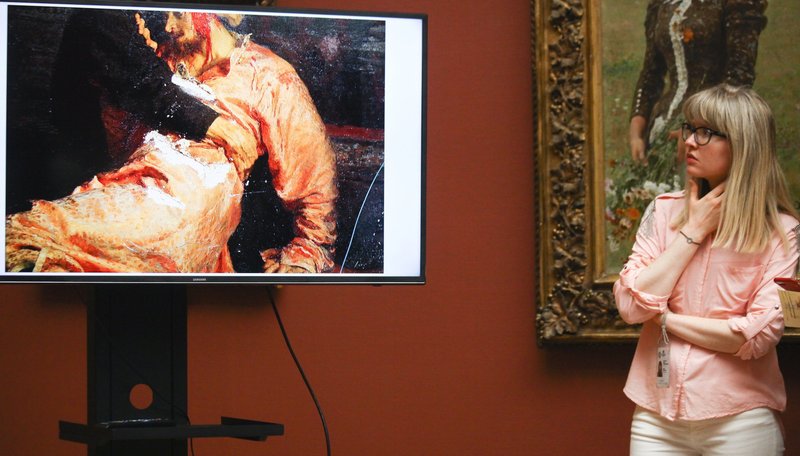 In this file photo taken Tuesday, May 29, 2018, A museum employee looks at the screen depicting the damage inflicted to a painting by Russian painter Ilya Repin in an attack at the Tretyakov State Gallery in Moscow, Russia. (Photo: AP)

A court in Moscow on Tuesday sentenced a Russian man to 2 1/2 years in prison for vandalizing a famous painting by the renowned Russian artist Ilya Repin.

The court found Igor Podporin guilty of damaging the painting, which depicts Russian czar Ivan the Terrible cradling his dying son after striking him in a fit of rage.

Podporin attacked the iconic “Ivan the Terrible and His Son Ivan on November 16, 1581” with a metal stanchion at the Tretyakov Gallery in Moscow in May last year. He claimed that he damaged one of the gallery’s most famous exhibits because he thinks it’s historically inaccurate.

Repin’s 1885 canvas suffered several holes through it, but the faces of the czar and his son were undamaged. The restoration work is expected to take several more months.

The attack, which raised concerns about security at one of the most famed galleries in Moscow, echoed an attack by an unstable man on the same canvas more than a century ago.

Back when it was first unveiled, Repin’s painting triggered a storm of criticism for its macabre portrayal of one of the darkest episodes of Russian history. It became the first painting in the Russian empire in 1885 to be officially banned from being displayed. It was allowed back into the gallery several months later.

In 1913, a mentally unstable man attacked the painting with a knife. The then-curator of the Tretyakov Gallery was so distressed by the vandalism that he threw himself a under a train.