A tourist group of 30 Chinese arriving at the train station in Saint Petersburg, Russia at 5:15 am on December 20, were terrified when three Russian men came out of nowhere and tried to grab one of the tourists' bag as they walked together to their bus. 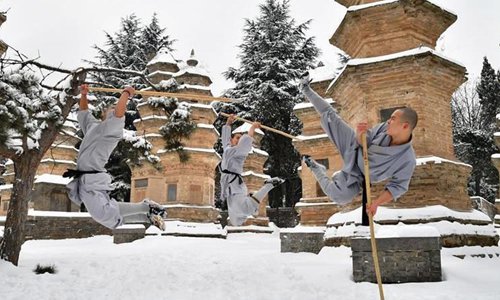 A group of monks is seen at the Shaolin Temple on Songshan Mountain, central China's Henan Province braving the chill and practising Chinese Kung Fu after heavy snow hit the region. (Photo: Xinhua)

They did not get very far as another member of the tourist group, Zhu Chuan from Jinan, East China's Shandong Province tackled one of the thieves.

This lead another of the Russian thieves to reach into his coat and apparently attempt to pull out a weapon, but he too was subdued by Zhao Wenyong, who is an auxiliary police officer from Jinan, Shandong newspaper Life Daily reported.

"It was the first time I have ever witnessed someone snatching a bag back from muggers, using their bare hands," the guide said. "I was frightened. My hands are still shaking," she said.

The group finally boarded their bus and headed to their hotel, but apparently did not report the incident to local authorities.