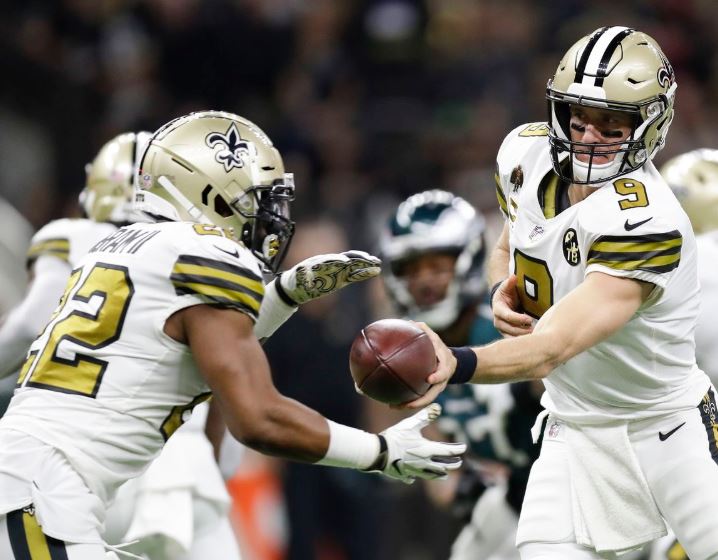 NFL teams buck for a playoff bye all season. Then people wonder if those four lucky clubs are going to be rusty when they return in the divisional round.

The football world finds out this weekend when the Chiefs, Patriots, Saints and Rams get into postseason action.

That January week off is coveted for a variety of reasons. Playing one less game decreases the chances of getting knocked out of the Super Bowl chase. Healing injuries is a critical piece of the puzzle. Extra time to strategize, particularly against an unfamiliar opponent, is a bonus.

And yet, there’s always the question of getting stale.

“I think, really, you could look at it where if you want to maintain your rhythm and your routine and being able to play — it’s been a couple weeks off — but I think the players would say that the rest is definitely the best way to go,” Rams coach Sean McVay says.

“Getting as healthy as possible for us where we’re about as healthy as you could ask to be going into the divisional round. So, I know we’ve certainly looked at it as a positive. It’s been a good chance for guys to kind of get refreshed, rejuvenated. There’s a good buzz in the building this week building into Saturday night.”

That would be when the Rams (13-3) host the Dallas Cowboys (11-6), who eliminated Seattle in the wild-card round.

The other matchups are AFC top seed Kansas City (12-4) hosting Indianapolis (11-6 after beating Houston) to open things. On Sunday, it’s New England (11-5) at home for the Los Angeles Chargers (13-4 after winning at Baltimore), and NFC top seed New Orleans (13-3) home for defending Super Bowl champion Philadelphia (10-7 after a victory at Chicago).

So what if Neil Young was correct that rust never sleeps? Are the Chiefs, Patriots or Saints in need of some WD-40?

New England safety Patrick Chung notes the bye was “a good time to rest up, hang out with my family, chill out, get my mind off football. We’re locked in now.”

Teammate Phillip Dorsett senses the opposite of rustiness: “Having a week off from football, it’s tough, but a lot of guys wanted to go back out there, it’s a big game coming up ... definitely excited to go out there and start playing.”

The Colts are 4-0 in the postseason against the Chiefs, 2-0 at Arrowhead Stadium. They are on quite a roll after going 1-5, with an efficient offense that protects its quarterback better than any team, allowing sacks on only 2.7 percent of Andrew Luck’s passes. That could be a key because the Chiefs’ defense is one-dimensional, with a strong pass rush but otherwise plenty of holes.

Kansas City scored a franchise-record 565 points, third most in NFL history. Mahomes led the league with seven games with a 100-plus passer rating (Luck was third with five). Mahomes set a franchise record for TD passes (50), touchdown-interception differential (plus-38) and 300-yard passing games (10).

Worth focusing on: The tight end production for Indy’s Eric Ebron, who had 15 touchdowns this season, and KC’s Travis Kelce, second among TEs with 1,336 yards receiving. He has a catch in 79 straight games.

These franchises have split eight postseason games, and the Rams are the most frequent playoff opponent for Dallas. The Cowboys last won a road playoff game in 1993 on their way to a Super Bowl title, but their next playoff victory will be their 36th, tying Pittsburgh for the most in NFL history.

Rams All-Pro defensive tackle Aaron Donald topped the NFL with 20 1-2 sacks, nearly twice as many as Cowboys leader Demarcus Lawrence’s 10 1-2. Under former Dallas coach Wade Phillips, LA’s defense had 41 sacks to the Cowboys’ 39, yet the Rams had 97 more sack yards.

Worth focusing on: This game could be decided on the ground, which means All-Pro Todd Gurley for the Rams and second-teamer Ezekiel Elliott for the Cowboys. Elliott won the rushing title for the second time in three years, but Gurley was sidelined late in the schedule by a knee injury. Gurley led the league in touchdowns with 21, 17 rushing.

New England was 8-0 at Gillette Stadium, the only perfect home record in the league. And the Chargers were a league-best 7-1 on the road — some say they don’t really have home games considering they play in a temporary stadium built for soccer — and won at Baltimore last Sunday.

Quarterback Philip Rivers enters Sunday’s game with a 1-7 record against the Patriots, including 0-4 in Foxborough and 0-2 in the playoffs. There is concern about leading rusher Melvin Gordon, who hurt his knee in Baltimore.

Conversely, Tom Brady is 2-0 in the playoffs and 6-2 in regular-season meetings.

Worth focusing on: The secondaries. If the weather is decent, Brady and Rivers will be testing defensive backfields of varying accomplishments. There often have been gaping holes in New England’s coverages, while the Chargers have an All-Pro in rookie safety Derwin James, and another standout back there in Desmond King.

They call him St. Nick around Philly, and the way Nick Foles has performed, why not? He guided the Eagles to the championship and was Super Bowl MVP last year after replacing an injured Carson Wentz. This time, with Wentz sidelined again, Foles got the struggling Eagles into the postseason, then helped them beat the Bears in the wild-card game.

He’ll need to be plenty, well, saintly against New Orleans and its collection of Saints, the league’s top team in the regular season. Drew Brees has had perhaps the best season of his Hall of Fame-caliber career. And of all the teams coming off byes, New Orleans is the most balanced. Oh, yeah, the Saints also routed the Eagles 48-7 in November, before Philly won six of the next seven, including the 16-15 verdict in Chicago.

Worth focusing on: Again, the secondaries. The Eagles have prospered despite a rash of injuries there, and the Saints’ DBs can be had when the guys up front don’t get in a QB’s face.