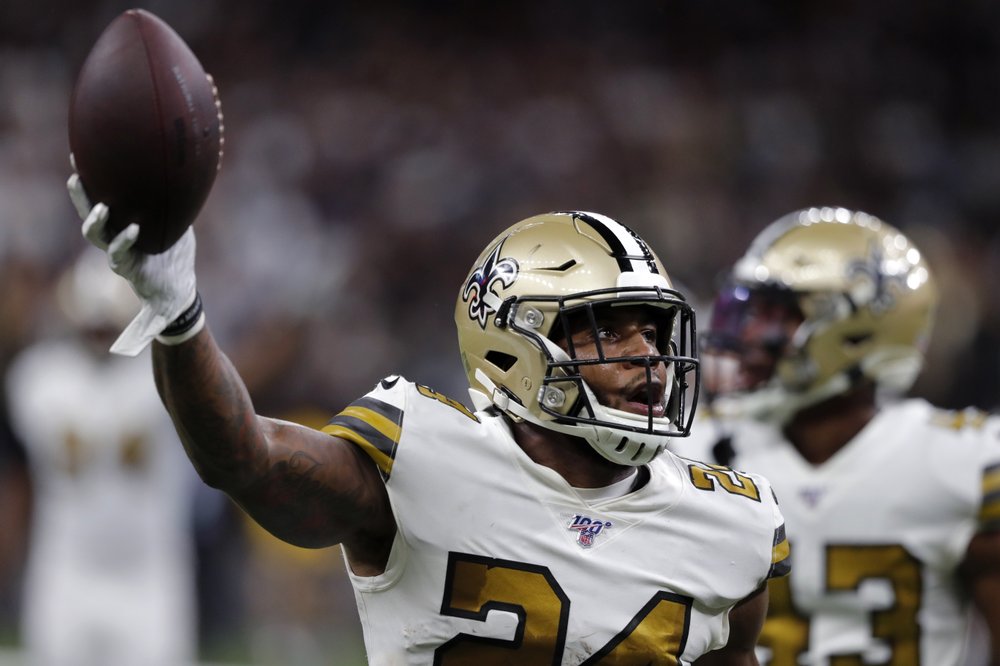 New Orleans Saints strong safety Vonn Bell (24) celebrates a fumble recovery in the first half of an NFL football game against the Dallas Cowboys in New Orleans, September 29, 2019. (Photo: AP)

As Marcus Williams came down with an interception to seal the Saints’ triumph over previously unbeaten Dallas, injured quarterback Drew Brees ran to rookie C.J. Gardner-Johnson to offer a congratulatory hug and tap on the helmet for the defensive back’s role in rushing Dak Prescott’s errant desperation throw.

The Saints are surviving their record-setting QB’s absence with effective defense and special teams, and making it clear that they won’t relinquish their status as NFC contenders — even if that means finding ways to win without the high-powered offense that has largely defined them since coach Sean Payton and Brees joined forces in 2006.

Vonn Bell’s forced fumble and two recoveries helped the Saints stifle a Dallas offense that had rolled through its first three games, and Wil Lutz kicked four field goals to lift New Orleans to a 12-10 victory over the Cowboys on Sunday night.

“It’s sweet when you get a victory like that, with that type of team, when they have that type of mentality, when they come in and try to out physical you,” said Saints middle linebacker Damario Davis, who the past two weeks has taken over Brees’ role in giving hype speeches to teammates during pre-game warmups. “When you know it’s going to be a dog fight, to be able to hit back and come out on top, that’s the type of win that feels real good.”

Dallas came in with the NFL’s third-ranked running attack, averaging 179 yards, and had scored no fewer than 31 points in a game. But the Cowboys met much more resistance in the raucous Superdome, where the Saints’ defensive front was bolstered by the return of tackle Sheldon Rankins from an Achilles tendon tear that had sidelined him since January.

“Hats off to the defense,” said Saints quarterback Teddy Bridgewater, who improved to 2-0 as starter in place of Brees, who wore a black wrap on his surgically repaired right thumb. “In this league we know how hard it is to win football games and no one said it had to be pretty.”

Prescott gave Dallas (3-1) one last shot when he found Randall Cobb over the middle for 32 yards to the Cowboys 48 and spiked the ball with 2 seconds left. But his desperation heave was rushed by Gardner-Johnson’s blitz and Williams snagged New Orleans’ third forced turnover of the game.

Bridgewater went 23 of 30 for 193 yards. He was intercepted for the first time this season, albeit on an accurate pass that bounced off of Ted Ginn Jr.’s hands near midfield in the first quarter.

“I don’t care about the numbers,” Bridgewater said. “My job right now is just to help this team win football games.”

This victory was the first of the Payton era in which New Orleans didn’t score a touchdown and kept the Saints (3-1) atop the NFC South.

Ezekiel Elliott scored the game’s only touchdown in the third quarter to give Dallas a 10-9 lead. But he finished with just 35 yards and his longest run was 6 yards. He was also stripped by Bell on a fourth-and-short run.

“They have first-round picks all across that defensive front. They’re a talented group and they did a good job moving up front and not allowing us to consistently run the ball,” Cowboys coach Jason Garrett said. “Obviously that’s a big part of what we want to do, and we weren’t able to sustain drives.”

The Saints sustained their scoring drives with the help of receiver Michael Thomas, who had nine catches for 95 yards, and running back Alvin Kamara, who had 69 yards rushing and 20 yards receiving.

The Saints were in range of a field goal that could have put them ahead by five when blitzing Jaylon Smith sacked Bridgewater back at the 47-yard line, forcing New Orleans to punt with 1:45 to go.

Defensive tackle David Onyemata had the Saints’ only sack of Prescott on the first play of Dallas’ final drive. The Cowboys briefly recovered with a first down, but were pushed back on Amari Cooper’s offensive pass interference call with 30 seconds left.

Dallas’ defensive end Robert Quinn had two sacks, one week after he had a sack and a career-high seven QB pressures in his Dallas debut against Miami.

Saints coach Sean Payton had mentioned Friday that New Orleans was 12-1 with the officiating crew headed by referee Carl Cheffers that worked the game, and joked that his players better be nice. The Saints were penalized nine times for 80 yards, and a pass interference call against Davis extended Dallas’ touchdown drive. The Cowboys were penalized six times for 64 yards.

Payton focused criticism about New Orleans’ penalties on himself and the team.

Cowboys: Reserve safety Kavon Frazier left the game in the first half with a pectoral injury. ... Left tackle Tyron Smith appeared to have a lower body injury on the last drive.

Saints: Reserve defensive end Trey Hendrickson, who entered the game leading the Saints in sacks with three, was taken to the locker room with a neck injury in the second quarter and did not return.