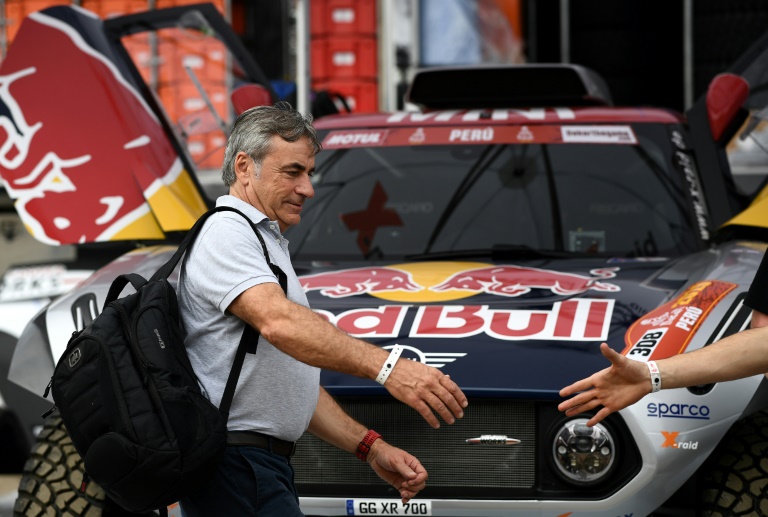 Spain's Carlos Sainz heads up a formidable Mini trio as he bids to defend his Dakar Rally title when the gruelling 10-stage race, being hosted for the first time by a single country, gets under way on Sunday.(Photo: AFP)

Spain's Carlos Sainz heads a formidable Mini trio as he bids to defend his Dakar Rally title when the gruelling 10-stage race, being hosted for the first time by a single country, gets under way on Sunday.

The trio have a remarkable 20 Dakar victories between them, Peterhansel having won six times on the motorbike and seven times in a car, while Despres is a five-time motorbike winner and Sainz also claimed victory in 2010.

"Once you have won, all you want to do is come back and win again. You're still aware of what kind of race it'll be and you try and adapt to the car and its characteristics.

"The Dakar challenges you in every way both physically and mentally. It taxes all your strength and that of your team, so victory brings maximum satisfaction."

Mini look set to be best tested by Toyota, with Qatari Nasser al-Attiyah, a double Dakar winner (2011, 2015), no doubt looking forward to the sand-heavy rally.

Attiyah finished second last year and will be bolstered by teammate Giniel De Villiers, the South African who claimed the Dakar title in 2009 and has had seven other podium finishes including third in 2018.

Nine-time World Rally champion Sebastien Loeb also returns for the fourth time, hoping to become the first privateer to win the Dakar Rally since Jean-Louis Schlesser back in 2000.

'Several teams have a shot'

Loeb, who will be driving a Peugeot 3008 prepared and fielded by the PH-Sport private team, has previously made his mark with a total of 10 stage victories and a second place finish in 2017.

"Several teams will have a shot at winning and I hope we are one of them," said Loeb.

"I like the dunes. I haven't forgotten everything I've learned these past three years and I'm still hungry for success!"

Since the race switched from its original route from Paris to the Senegalese capital Dakar for security reasons in 2009, it has enjoyed multiple hosts in South America.

But this year Argentina, Chile and Bolivia all pulled out for economic reasons, leaving Peru as the sole host of the 41st edition.

Race director Etienne Lavigne insisted it would not be a "cut price" race despite the reduction of the rally from 9,000 kilometres over 14 stages in 2018 -- when it went through Peru, Argentina and Bolivia -- to 5,000 kilometres across 10 stages in 2019.

The shortened course has certainly not put off the competition with all the big names of the recent past among the 334 vehicles including 167 motorbike and quads, 96 cars, 30 SxS (buggies) and 41 trucks registered for the race which ends in Lima on January 17.

"The goal is to reach my full potential on the 2019 Dakar. The mission is clear: defend my title," said Walkner.