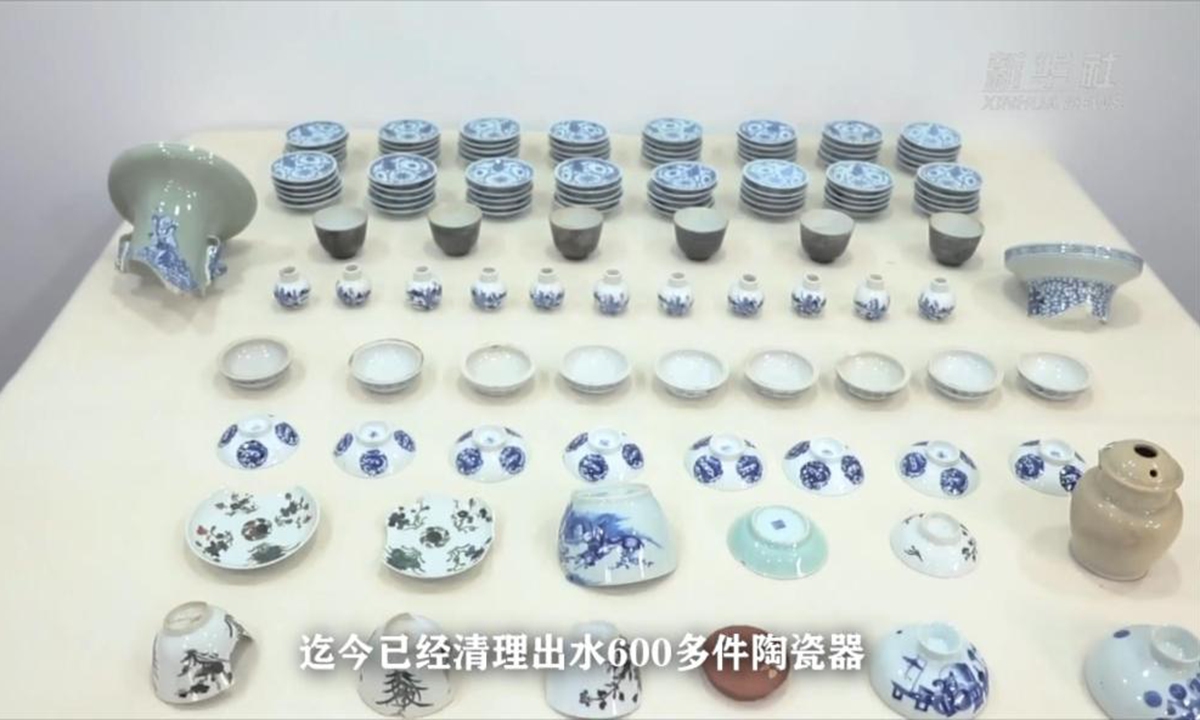 MMore than 600 artifacts had been revealed by Tuesday during the salvage of the Yangtze River Estuary No.2, China's largest and best-preserved ancient underwater wooden shipwreck. Experts said that the discovery of the relics shows constant cultural exchanges between China and the West, and more discoveries are expected after the ship is fully excavated.

The ceramics unveiled were all well-formed and believed to be mostly for trade exchange in the early days when Shanghai, where the Yangtze River Estuary No.2 was found, was an open port, as the origin of the historic Maritime Silk Road.

As a milestone in China's underwater archaeology, the Yangtze River Estuary No.2 was a sailing ship from the reign of the Tongzhi Emperor of Qing Dynasty (1644-1911). The shipwreck is about 38.5 meters long and 7.8 meters wide, and it contains 31 cabins. The ship is "sleeping" under the waters northeast of Shanghai's Hengsha Island, with its hull buried 5.5 meters under the seabed.

The relics show that there were constant cultural exchanges between China and the West, Liu Zheng, a member of the China Cultural Relics Academy, told the Global Times. For example, Liu said that rare green glaze porcelain produced in China's porcelain capital Jingdezhen, East China's Jiangxi Province, was inspired by European porcelain-making techniques.

"Such porcelain items show how well China could 'digest' Western cultures, and it embraced such cultures 100 years ago," Liu emphasized.

Liu said there would be more to come after the ship was fully excavated, especially some lifestyle items and "food relics."

"Undertaking a sea voyage requires a lot of living goods such as tableware and even food relics. I'm waiting to see these once the vessel is salvaged," Liu said.

Unlike the Nanhai No.1 shipwreck from the Song Dynasty (960-1279) discovered in the South China Sea 35 years ago, the "younger" Qing Dynasty ship is proof of the long-developing Maritime Silk Road culture in China spanning different periods and carrying on to the present day, Liu said.

On March 2, the National Cultural Heritage Administration and the Shanghai municipal government jointly announced the official launch of the Yangtze River Estuary No. 2 cultural relic protection project. As a major underwater archaeological project in China, this project has been listed in the 14th Five-Year Plan for cultural relics protection and scientific and technological innovation.

The project adopts the world's first technology using arc beams for non-contact migration of cultural relics to salvage the ancient ship, according to reports.

During the on-site operation at sea, the main operation ship of the salvage and relocation project will lay down 22 giant arc-shaped beams around the ancient vessel to form a huge semi-cylindrical caisson.

This will wrap the vessel, along with sediment and sea water, with a total weight of more than 10,000 tons without leakage. It will lift the water and "embed" it in the central open moon pool of another special salvage engineering ship. The entire offshore operation is expected to take two to three months.

Experts said that the underwater archaeology work of the past 30 years in China, including the archaeological excavations of Huaguang Reef 1, Coral Island 1 and other important shipwrecks, not only demonstrates the prosperity of the ancient maritime Silk Road, but also fully shows the long history of Chinese ancestors in the South China Sea - a physical witness of China's indisputable sovereignty over the region.

The special technology of underwater archaeology has become mature, and it can be applied to the whole method and process of work, Zhao Dongsheng, associate professor of archaeology in the school of history of Nanjing University, told the Global Times on Tuesday.

The Yangtze River Estuary No. 2 is expected to "break the waves" before the end of this year and settle in the Huangpu River, the Xinhua News Agency reported. Archaeologists will carry out follow-up archaeological work, and a museum of ancient ships will be built at the site.