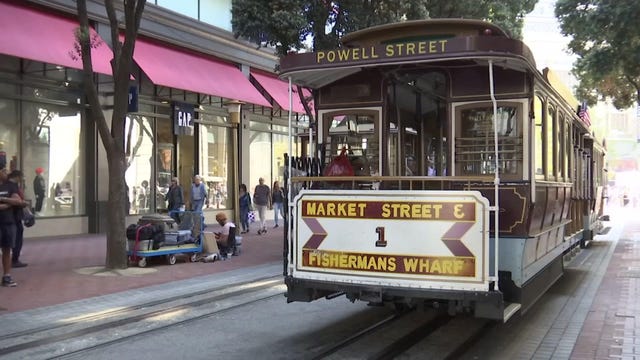 SAN FRANCISCO, Sept. 13 (Xinhua) -- San Francisco's iconic cable cars were pulled out of operation on Friday due to a 10-day system repair of one of the city's oldest transportation vehicles, city authorities said.

The San Francisco cable car system, which is the world's last manually operated cable car transportation network that runs on three routes through the downtown areas, will undergo gearbox rehabilitation as part of a 6-million-U.S.-dollar upgrade project that keeps the vintage system in good shape.

Workers with the San Francisco Municipal Transportation Agency (SFMTA) are refurbishing the fourth gearbox that controls the Hyde Line, the master cable that is key to the normal operations of the cable car system.

The four heavy-duty gearboxes, which have been in operation since 1984, propel cable cars up the steep hills in San Francisco, which makes it a unique and exciting sightseeing attraction for tourists from around the world.

Rafael Garcia, a tourist from Europe who is on a week-long vocation in San Francisco, told Xinhua that he felt a little bit disappointed when he did not find a cable car at an intersection in Chinatown, where the vintage cars usually stop for a while to let riders step off and head for Chinatown's tourist destinations.

SFMTA said shuttle buses will run along all the cable car stops following the Powell-Mason, Powell-Hyde, and California cable car lines during the gearbox repairs, the final step of a three-year restoration project of the cable car system.

Invented here nearly 150 years ago, the city's cable cars were named a National Historic Landmark in 1964, according to the SFMTA.